Tagline: If the Taliban doesn’t get them, then the worms sure will!

Richard (Gedrick) and a small group of Marines are stranded in the remote Afghan desert and they need to reach the evac point. But getting out of the desert proves more than difficult as they are confronted by Taliban forces, and at often times 60-foot long worms (strangely enough, the worms that plagued the town Perfection in the movie Tremors.)

For those who have not seen this movie, think Dune meets Tremors, and there you have it. Yet another SyFy doozie with no originality and familiar plot lines (think Aliens).

While it was predictable to say the least, there were some moments there; Like Private Andrews, whose performance reminded me alot of some of the characters Chris Penn plays; The brief touching moment between Richard & Jan, and who can dismiss the suspicious Amal, especially when he professed to be “not a terrorist”, but in the same token he was acting very strange when he was leading the troop through the mines to safety.

This was not the worst movie I have seen, I will say that it was, very predictable. One can only wonder that if a sequel is made if they will have Rambo rescue the hostages and wipe out the Sand Serpents 🙂 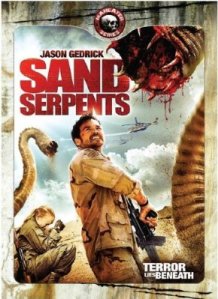