Book Tour – Song of a Dead Star by Zamil Akhtar 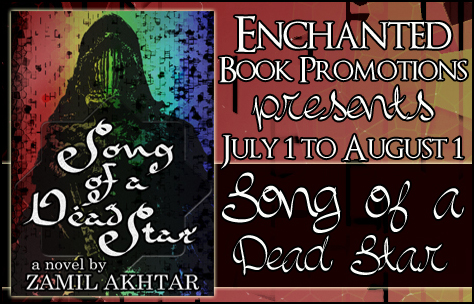 When Kav sleeps, a firefly whispers in his ear that his wife is not dead. But to find her he has to kill the three Magi that protect the land of Eden.

The same Magi destroyed Kav’s hometown four years ago to crush a rebellion, and he hasn’t seen his wife since.

As Kav plots to kill the Magi, a flying armada bent on conquest and destruction invades Eden. Only the Magi and their ability to turn sunshine into magical energy can stop them.

Granted the same power by the firefly, Kav must either kill the Magi to reunite with his wife, or let go of his longing for the sake of Eden and its people.

Zamil Akhtar is an indie science fantasy author and blogger living a location-free lifestyle. He can be found in Boston, Dubai, or Manila depending on the time of year. Of Pakistani-heritage, he grew up in the Middle East and moved to Western Massachusetts when he was thirteen, and his varied upbringing colors his fiction. He has a BBA in Marketing from the University of Massachusetts and an MA in International Relations from Johns Hopkins University. His loves are videogames, science-fiction and fantasy novels, HBO dramas, and Southeast Asia.