An assassin is at work—one of the best in the trade. His body turned to dust long ago, but his spirit roams the Earth freely, undetectable to the five senses. He stalks his victims waiting for just the right opportunity. Then, in quick succession, he possesses a human host and strikes down his quarry. For a century and a half he has served this way.
Deputy Sheriff Nate Barrington is riding the crest of a new relationship. Kaitlyn Spencer is beautiful, altruistic, enlightened—everything he’s not. She teaches classes in New Age philosophy at her growing school. Nate doesn’t share her spirituality, but the physical passion hasn’t subsided enough for him to care.

Nate’s nirvana quickly unravels when Kaitlyn’s life is threatened on two separate occasions. With no apparent motive or any evidence suggesting collusion, the police are stumped. Even more troubling to Nate, Kaitlyn is eventually convinced she is the target of unseen forces.

A hardheaded pragmatist, Nate isn’t prone to believe that spirits can possess people. As far as he’s concerned, Kaitlyn’s claims of perpetrators possessed by a spirit assassin are on par with comic book stories and have nothing to do with reality, and her esoteric, New Age mumbo jumbo begins to drive a wedge into their relationship. And why Kaitlyn? What secret is she hiding?

Even with the sheriff’s resources at Nate’s disposal, the odds for Kaitlyn’s survival are not in her favor. The true enemy is virtually invisible, and Nate’s conventional police tactics have no effect on the spirit world. Strikes come from anytime, anywhere, and from random, unwittingly manipulated people. Behind it all is a deal the assassin had made with the devil: send Kaitlyn Spencer to an early grave in exchange for a fresh start. For that, the assassin will stop at nothing to uphold his end of an Unholy Bargain. 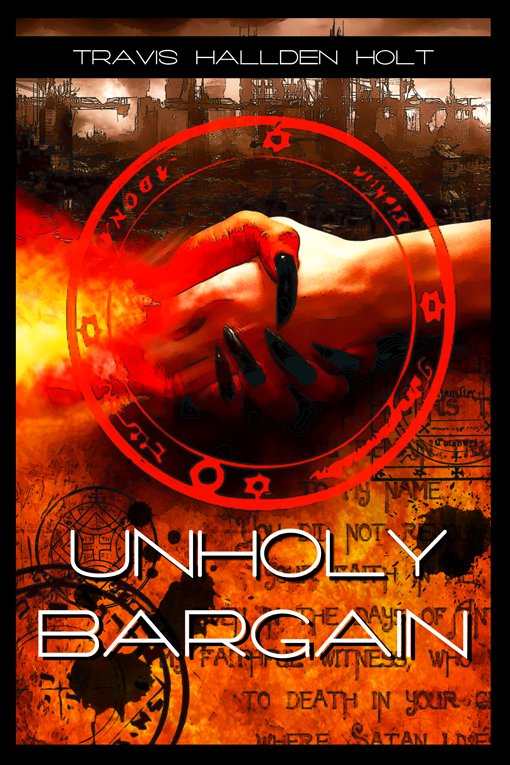 Travis Hallden Holt is a former U.S. Navy surface warfare officer and veteran of the Persian Gulf War. He’s worked the past twenty-two years in the corrections side of law enforcement, first in the prison system, then in the streets as a probation officer. He spent three years supervising felons in a south Atlanta neighborhood ranked the ninth most dangerous neighborhood in America, where one in every twelve residents becomes a victim of crime each year.
For years, his interests were in weaponry (both small arms and large scale), warfare tactics, hand-to-hand combat, criminal justice and unsolved crimes. But life has a way of molding perspectives, and Travis came to realize the physical world known to the five senses didn’t have all the answers. It scratched the surface at best. Accordingly, Travis’s interests shifted to supernatural phenomenon, spirituality, the mysteries of life, the invisible world beyond our five senses and the forces that lie therein. He’s still a peace officer, but one who has mingled with psychics, mystics, mediums, energy healers, shamans, gurus, artists and denizens of the “underground.”
Travis is the author of Unholy Bargain, a supernatural thriller published by Blood Moon Publishing. He resides in Atlanta, GA.

Back when Nate was a freshly scrubbed rookie, his grandmother had been victim to one of the most brutal and senseless murders in Florida history. The perpetrator was a baby-faced, fifteen-year-old boy who had lived in her aging yet quiet neighborhood.

By all appearances, he looked the most unlikely of killers, like a boy who should be bagging groceries or stumbling through school hallways hunched over by an overstuffed book bag. But that is not what made the case unique. The boy had no priors. No run-ins with Nate’s grandmother, or anyone in his family for that matter. He wasn’t on drugs or in a gang. There was no motive for the boy to snarl at her, let alone murder her, yet forty-eight times he had plunged a knife into her chest.

The case wasn’t tried. The boy and his attorney had negotiated a plea. Before the boy made his one-way trip to the “big house,” an assistant state’s attorney had mentioned to Nate in passing that during a pre-trial hearing the little shit had the gall to claim he had been possessed by an evil spirit during the commission of the crime. The ASA said it was probably a scare tactic for a run at an insanity plea if the State had insisted pursuing the death penalty. It may have worked. The State decided to forego the psychological evaluations, expert testimonies, the media—the whole damn circus—and most of all the expense of a lengthy trial. Premeditation wasn’t easy to prove beyond reasonable doubt anyway, even if evidence was stacked in the State’s favor.

Nate had dreamed of watching the kid fry in the electric chair, the same chair that sent Ted Bundy to his grave. Not only had the son-of-a-bitch robbed him of his grandmother, he had ripped from Nate and his family their last vestige of real justice.

It was late afternoon, and the daily thunderstorms had rolled in and bellowed their oration to the Earth. The breeze grew into swirling winds, and Spanish moss danced like frantic marionettes beside waving palm fronds. Nate drove east on the Bee Line Expressway, slowing to a crawl when choked by airport and commuter traffic. His scalp and face stung like day-old sunburn, and below his skin, at the core of his skull, a dull ache had synched to his heartbeat.

Nate called the warden in charge of the state prison in Orange County. A secretary answered. “I’m sorry, sir, but he’s busy right now. Can I take a message?”

“He’s in a meeting. If you’ll just leave your number I—”

“Interrupt his meeting. Trust me; it’ll be worse if you don’t.”

“Can you at least tell me what this is about?”

She sighed, started to say something, then exhaled deeply. “All right.”

“This had better be important,” said a voice, gruff and annoyed.

“I need to interview one of your inmates.”

“Christ! This isn’t a good time. I’m in the middle of things.”

“Your convenience isn’t my concern.”

“I’ll be there in thirty minutes.” Nate disconnected the call before the warden could respond.