NOTE:  A percentage of the sales of this book will be donated to Children’s International, a not-for-profit organization very close to the author’s family’s  heart. Past books in the series have benefited The American Red Cross, The American Cancer Society, Tuesday’s Children [a 9/11 charity], and The Dave Thomas Foundation for Adoption.

A mystery is introduced in No Ordinary Day, the first book in the Extraordinary Days series that is carried through all eight volumes and solved in the last book, Sunday’s Child: Born on the Sabbath Day, due out in January of 2017.

In the late spring of 1991, a flood and fire of historic proportions tore through the pretty resort town of Obergrande, New York, in the central region of the Adirondack mountains.

The twin disasters destroyed a large part of the east side of the town that bordered the Hudson River and Lake Obergrande.

In the aftermath, a new dam was built, and that damaged part of the town “drowned,” covered by the new, larger lake.

During that terrible flood, five kindergarten girls were trapped in their drowning school, huddled together as the water rose higher, rescued just in the nick of time. The nightmare bonded them, and three others like them, to each other for life.

These are their stories.

International attorney and human rights advocate Elisa Santiago believes she has life under control—an impressive career, a solid group of friends in Obergrande, and a handsome law partner for hot “car action” when she needs release. Little does she know that her entire world is about to burn down when she discovers that nothing she believes she knows about herself and her past is true. Can the gorgeous former CIA operative, acting as her guide and guard as she returns to Colombia, the land of her birth, looking for answers, set her world on fire in a good way?

THURSDAY’S CHILD: Far to Go is the fifth book in the eight-book series The Extraordinary Days by breakthrough novelist Polly Becks. The first book, No Ordinary Day, tells the tale of an epic tragedy that changes life forever in a small town in the wild, mystic Adirondack Mountains of upstate New York, and the mystery surrounding that tragedy. 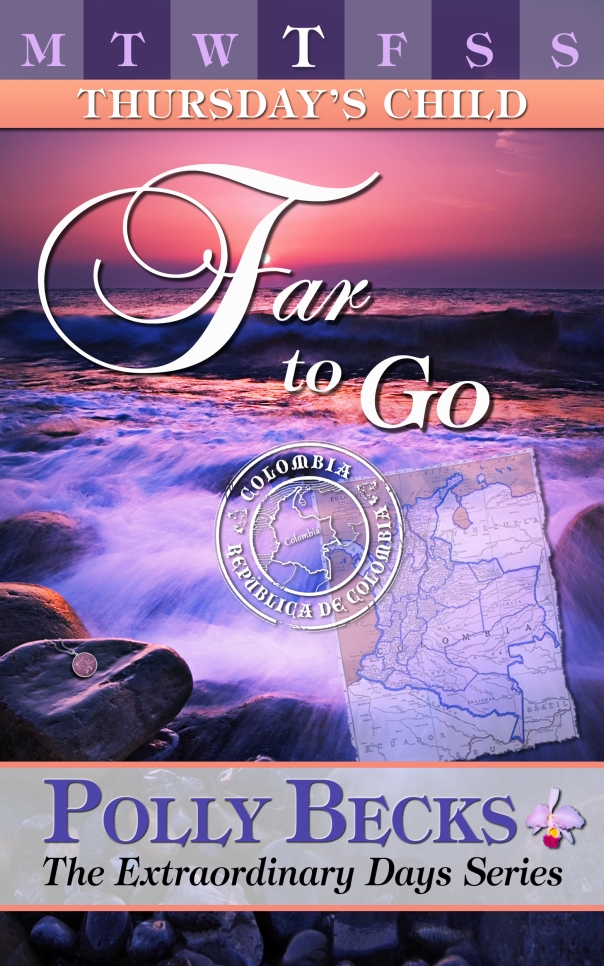 The young man at the front desk in the luxury apartment building looked up in surprise at the quartet of women making their way across the lobby, carrying what looked like a variety of flowers, sweets, and boxes, chatting happily amongst themselves as every male head in the lobby turned in their direction.

An older man in the uniform of a professional driver or chauffeur was following them, his arms piled high with packages, puffing slightly.

The women, who were carrying on an intense four-way conversation between them, did not notice the attention they were garnering like magnets. They ranged in height from just over five feet to just under six, with a variety of body types, hair and skin colors ranging from alabaster to ebony, and clothing styles, all of which had some sort of bright artistry to them.

They stopped in front of the desk.

The tallest of the group, a fair-skinned beauty with gray eyes and shoulder-length brown hair atop a tall, willowy figure, smiled down at him.

The young man slid his swivel chair quickly under the desk to shield his lap from view.

“Qui appelle?” he asked in a French-Canadian accent. “Er—whom shall I say is calling?” He picked up the phone.

“The—uhm—Fivesome,” Briony Windsor, known as Sarah to her friends, said.

The young man waited for an answer, requested permission for entry and, receiving it, directed the four women to the penthouse elevator, only to discover they had started across the back lobby while he was hanging up.

They already knew where they were going.

“Has anyone heard from Sloane’s father recently?” Dr. Corinne Byrnes, a veterinarian and the second-tallest member of the group asked the others as they entered the elevator and pushed the button for the top floor.

“I spoke to him last night,” said Reverend Grace Fuller, the Associate Pastor of the Obergrande Community Church back in New York State. “He says she seems to be doing better, as long as she rests. Apparently he hasn’t been entirely successful at keeping her in bed.”

“Shocker,” mused Elisa Santiago, esq., a practicing attorney and civil rights advocate who divided her time between law on the international stage and a quiet practice back in Obergrande, the pretty Adirondack hometown of the four young women and the friend they had come to visit. At five-foot-three, she was petite, like Grace, and extraordinarily well put-together, every detail of her wardrobe perfect, just as every detail of her business and personal life seemed to be.

“Well, between us we have plenty of things to keep her amused in bed,” said Briony. “Although that’s like selling ice to penguins; Sloane has made of art of being kept amused in bed most of her life.”

“Truth,” mused Corinne as the elevator doors opened, providing a stunning view of downtown Montreal and its exquisite spires.

The four women hurried down the sunlit hallway of windows to the door where the number 2 was elegantly displayed.

A tall, strapping, dark-haired man with a finely-featured, neatly-bearded face opened the door a moment later.

All four women blinked in surprise.

“Come in, ladies,” he said quickly.

The women looked at each other, then followed him into the penthouse.

“What’s he doing here?” Grace whispered to Briony. “Sloane told me they couldn’t stand each other.” Briony shrugged.

“Perhaps they’re working on the Quadricentennial?” Elisa suggested as they passed through the elegant central foyer into the open living area, a high-ceilinged room ringed with floor-to-ceiling windows.

She turned to Corinne, the only one not to have met Nathan Marlowe. “He’s a world-class history professor here at McGill and in New York at NYU, a specialist in the Adirondack Park area and particularly in Obergrande. Sloane’s mother hired him to do the authentication and other research for the town’s four-hundredth anniversary next May.”

“Well, if her mother likes him, I can see why Sloane can’t stand him,” said Corinne. “Those two can’t agree on whether the sun is up or not.”

Dr. Marlowe was standing at the far left edge of the open sitting area, next to the door that led to Sloane’s bedroom suite.

The women and their driver, still lugging their packages, followed him.

A glorious spicy smell filled the air near the kitchen.

On their way past a recessed alcove in which a towering animal cage stood, Corinne paused and clicked softly at the sweet, melon-sized animal inside it.

Ed Hillenbrandt, the driver, waited until she was following the other girls again, then paused in front of the cage himself.

“I still say you would make a nice hat,” he whispered.

Pfeffernusse just stared at him with her big black chinchilla eyes. Then she flicked her large ears and spun around, her white belly disappearing from view as she turned her gray-blue back to him.

“You’re not by any means the first female to give me the cold shoulder, ma’am,” Ed said as he went to join the women.

Polly Becks has been making her living writing for more than twenty years, as well as working as an editor, curriculum developer, and teaching secondary-school Spanish. She has more than 350 books to her credit, mostly educational materials, as well as professionally published fiction in both the adult and YA market in a variety of genres, plus more than 30 Children’s books. She is excited about exploring the digital literature frontier and is honored to be the launch series for GMLTJoseph, LLC. – See more at: http://www.pollybecks.com/author/#sthash.pEZ6f3xO.dpuf

Polly is awarding one randomly chosen winner via Rafflecopter one 3-foot long stem rose in a glass vase from TheUltimateRose.com or similar florist; US only