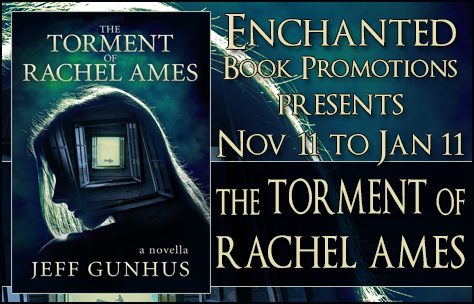 Suffering from writer’s block, novelist Rachel Ames escapes to a lake cabin to calm her mind and regain a sense of herself. The location is perfect. Isolated. Beautiful. Inspiring. It even comes with a good-looking landlord who shows an interest in her. But she can’t shake the sense that something terrible has followed her to the lake, something just beyond her consciousness, something out on the edge where the sounds of a raging fire and sirens linger whenever she slows down to listen. Determined to make the cabin work, she tries to settle in and give her new life a chance. But when strange things begin to happen around her, she wonders if she’s made a terrible mistake. As the darkness that’s followed her manifests itself in inexplicable ways, her concept of reality is stretched thin and she realizes nothing at the lake is what it seems. As she fights to survive with her sanity intact, she understands too late that the location she’s chosen for herself is far from perfect.

Jeff Gunhus is the author of thriller and horror novels for adults and the middle grade/YA series, The Jack Templar Chronicles. The first book, Jack Templar Monster Hunter, was written in an effort to get his reluctant reader eleven-year old son excited about reading. It worked and a new series was born. His books for adults have reached the Top 100 on Amazon and have been Foreword Reviews Book of the Year Finalists and Gold Medal Winners.

After his experience with his son, he is passionate about helping parents reach young reluctant readers and is active in child literacy issues. As a father of five, he leads an active lifestyle in Maryland with his wife Nicole by trying to constantly keep up with their kids. In rare moments of quiet, he can be found in the back of the City Dock Cafe in Annapolis working on his next novel.

Rachel Ames knows she’s making a terrible mistake, but that’s never stopped her before. Even as she speeds down the empty highway, she’s certain nothing good will come of this trip. She can’t say why she has this belief, only that it’s deeply rooted, part of a visceral animal instinct clawing away at her insides. Call it intuition. Or call it common sense, doesn’t matter. Can’t change the fact that it’s the truth.
She refuses to change her destination, even if the rising sense of dread causes her heart to beat right out of her chest. She’s committed, this much is a fact, so she pushes aside all thought of turning around and focuses on the road ahead.
She checks the map on her phone, taking comfort in the little blue dot on the screen that symbolizes the exact spot in the world occupied by her aging Honda Accord with faded red paint, bad muffler and squeaking brakes. The dot sails along a straight white line surrounded by an ocean of green. She appreciates the simplicity of the image, the perfection of it. An object moving at a steady rate along a direct path toward a specific destination. No hurdles. No obstacles to navigate. Not even an intersection or a fork in the road. There are only two decisions to make. To continue forward or stop the car and go back.
And there’s no chance in hell she’s going back.
Her two gentlemen passengers are the perfect companions. Silent, good-looking and only there to cater to her whims and needs. They sit together in the seat next to her, sharing the seatbelt. That might have been overdoing it, but strapping them in together makes her laugh, so she forgives herself the indulgence. This is her journey, her time, so acting odd is her prerogative.
Besides, the two of them are the perfect complements. Daniels and Underwood. Booze and typewriter. Soul mates bound by common history and mutual reliance.
The Underwood typewriter was a great find her sophomore year in college, given to her by Professor McNeely’s widow soon after his very public death from a massive aneurism. It’d happened right in the middle of her creative writing class, just as the old bastard was finally saying something nice about her novel-in-progress. Mid-sentence, he’d slapped a hand to his head, made a small grunt and rolled his eyes back in their sockets. At first, she’d thought he was mocking her work, but then his back arched and he collapsed to the floor. After that came the convulsions, followed by the shit and urine filling his pants as her classmates screamed. Then, as the good book says, the lights went out and Elvis left the building.
But unlike Elvis, the man wasn’t much loved. A taskmaster who hated any writer beside himself, he used critiques as an assault rifle to mow down any young soul with the temerity to attempt the art that, in his mind, belonged only to him and a handful of his peers. Sure there were the appropriate candlelight vigils and the church service to honor the brave soul who died fighting the good fight in his ivory tower, but right under the surface, the humor rolled dark and furious.
I heard that the last pages he read really blew his mind.
You know that saying, would it kill you to say something nice?
Rachel guessed it had.