The Uber Author Planner is the ULTIMATE tool for Authors, Writers, and Bloggers.

Created by an author, freelance writer, and blogger, this planner is specially designed to keep everything writing-related in one place, making you super organised and super productive.

Far more than a simple planner, The Uber Author Planner will help you raise your writing profile, build your online platform, write more, publish more, and achieve your writing dreams. Coming with a double daily spread, plus weekly blog, newsletter, and social media planners, weekly and monthly target setting, word count tracking, and stacks of extra writing and blogging templates, this planner has everything you need. As if that wasn’t enough, there is also a separate 30 Day Novel Planner.

The planner’s flexible weekly system allows you to start it on any day of the year and still use it for a full 12 months. You will also get exclusive access to easily downloadable versions of all writing and blogging templates, so you can print out as many as you like once the ones in the book have been used! Standing at over 600 pages, hardbound for durability throughout the year, and beautifully illustrated in full colour, this is an EPIC resource for all authors, writers, and bloggers!

Hazel is an author, artist and archaeologist from Cheshire, England. She is the founder and owner of The Bookshine Bandit, a business dedicated to helping authors, writers, bloggers, and those looking to self-publish achieve their dreams and maximise their writing potential.

Since 2010 she has been working on a series of Gothic Literary novels, the first of which, Chasing Azrael, was released in April 2014. The Deathly Insanity series are a set of Urban Fantasy novels with overlapping character and plot-lines. Hazel’s other published works include Bleizgeist, and ‘Grave’, a short Dark Fantasy story. She has also published an additional novella and short story under a pen name.

While her primary interests are in Gothic and Fantasy art and fiction, Hazel reads a wide range of subjects and enjoys most forms of art. In addition to this, she runs The Bipolar Bear, a blog on bipolar disorder, and loves of dogs. Her King Charles Cavalier Spaniel, Dexter (yes, after the serial killer), is her near-constant companion.

Hazel is currently in the final year of her PhD, which focuses on Gender Dynamics in Late Iron Age and Early Medieval Britain. She studied at The University of Manchester for her Undergraduate degree, then Bangor University for her MA and PhD, spending the two years between her MA and PhD doing corporate archaeology and research excavations, both in Britain and in Austria. She has two papers published in international journals.

The Santa Claus Man: The Rise and Fall of a Jazz Age Con Man and the Invention of Christmas in New York
by Alex Palmer

Before the charismatic John Duval Gluck, Jr. came along, letters from New York City children to Santa Claus were destroyed, unopened, by the U.S. Post Office. Gluck saw an opportunity, and created the Santa Claus Association. The effort delighted the public, and for 15 years money and gifts flowed to the only group authorized to answer Santa’s mail. Gluck became a Jazz Age celebrity, rubbing shoulders with the era’s movie stars and politicians, and even planned to erect a vast Santa Claus monument in the center of Manhattan — until Gotham’s crusading charity commissioner discovered some dark secrets in Santa’s workshop.

The rise and fall of the Santa Claus Association is a caper both heartwarming and hardboiled, involving stolen art, phony Boy Scouts, a kidnapping, pursuit by the FBI, a Coney Island bullfight, and above all, the thrills and dangers of a wild imagination. It’s also the larger story of how Christmas became the extravagant holiday we celebrate today, from Santa’s early beginnings in New York to the country’s first citywide Christmas tree and Macy’s first grand holiday parade. The Santa Claus Man is a holiday tale with a dark underbelly, and an essential read for lovers of Christmas stories, true crime, and New York City history. 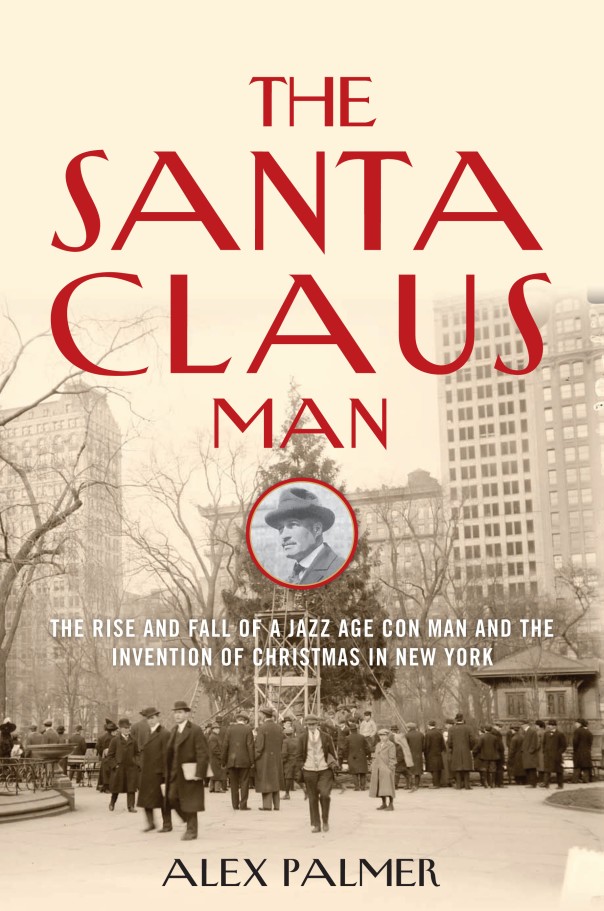 It’s impossible to say who wrote the first Santa letter, but it was almost certainly from the mythical saint, not to him.

From the earliest conception of Santa Claus in the United States, parents used the voice of St. Nicholas as a means of providing advice and encouraging good behavior in their children. The earliest reference to a Santa letter in America that I could find came from Theodore Ledyard Cuyler, recalling his childhood in 1820s Western New York when he “once received an autograph letter from Santa Claus, full of good counsels.”

Fanny Longfellow (wife of poet Henry Wadsworth) regularly wrote her children Santa letters, commenting on their behavior over the preceding year. “I am sorry I sometimes hear you are not so kind to your little brother as I wish you were,” she wrote to her son Charley on Christmas Eve 1851.

Soon enough, children started writing back, generally placing their letters on the fireplace, where they believed smoke would transport the message to St. Nick.

By the 1870s, scattered reports appeared of the receipt of Santa letters by local post offices. But with no actual fur-coated toymaker to receive his mail, each January, the department destroyed them.

It was a depressing business. But, officials asked, if mailmen began delivering Santa’s letters, to which other fictional characters would mail be shuttled?

In the face of negative publicity, however, New York City’s postmaster finally relented. Every year, for the entire month of December, any approved organization could answer Santa’s mail. No one volunteered. Then, in 1913, just as the Post Office was about to give up, a man named John Duval Gluck stepped forward. He’d be Santa Claus.

He was also a con artist.

Alex Palmer is the author of The Santa Claus Man: The Rise and Fall of a Jazz Age Con Man and the Invention of Christmas in New York, called “required reading” by the New York Post and “highly readable” by Publishers Weekly.

It tells the history of Christmas in America through the true-crime tale of a Jazz Age hustler who founded an organization to answer children’s Santa letters — and fuel his own dark dreams. Palmer curated an exhibit about this Santa Claus Association for Brooklyn’s City Reliquary Museum, earning attention from the Village Voice, Time Out New York, and inspiring a memorable segment on WNYC (http://wny.cc/1bQIx5k).

The son of two teachers, Palmer’s love of learning and sharing surprising stories behind familiar subjects has led him to become a secret-history sleuth. In addition to The Santa Claus Man, he is the author of Weird-o-pedia: The Ultimate Collection of Surprising, Strange, and Incredibly Bizarre Facts About (Supposedly) Ordinary Things, published in 2012 by Skyhorse Publishing. it offers up a wealth of unexpected facts of familiar things. His first book, Literary Miscellany: Everything You Always Wanted to Know About Literature, takes a look at some of the more colorful aspects of great writers and their works, and was published in 2010 by Skyhorse.

He is a full-time freelance journalist whose work has appeared in Slate, Rhapsody, Smithsonian, Vulture, the New York Daily News, Publishers Weekly, and The Rumpus, among others.

Alex will be awarding a $20 Amazon or B/N GC to a randomly drawn winner via rafflecopter during the tour.

Enter to win a $20 Amazon/BN GC – a Rafflecopter giveaway