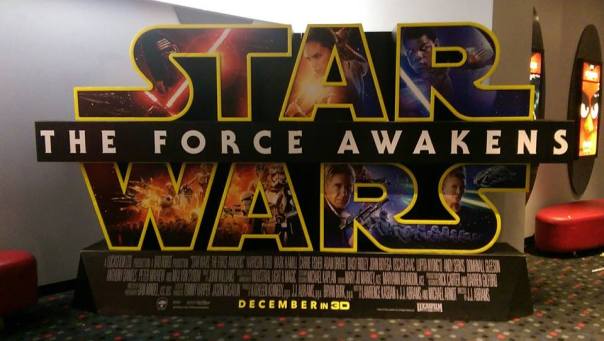 Plot: Three decades after the defeat of the Galactic Empire, a new threat arises. The First Order attempts to rule the galaxy and only a rag-tag group of heroes can stop them, along with the help of the Resistance. 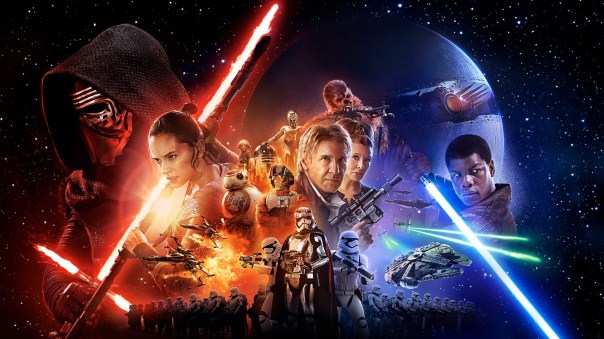 Review: Star Wars: The Force Awakens. Anyone whose anyone should have seen this film by now, and if you haven’t seen it, then you need to go home and rethink your life….

Being a SW fan from way back, I had been awaiting this instalment of the SW saga with much impatience. So you can imagine just how excited I was when we went to watch it last night. To me, it brought back a lot of memories. None so familiar though as went I saw Return Of The Jedi on the big screen way back when.

I remember the very first time I went to see ROTJ. It was 1983, and along with my parents, we went to the drive-in theatre at Aspley (Brisbane). Of course, seeing it a drive-in is not exactly the same as being in a cinema, but fun none the less. When the smoke had cleared, and the rebels had won the day, we went home, and being the teenager I was, I actually thought I too could become a Jedi… Vader and his master The Emperor were defeated, and the rebellion won the day at last….

Flash forward to 1999, when The Phantom Menace hit the screens. Although TPM brought to life the backstory of Anakin, the most traumatic scene for me was when Qui-Gon was killed by Darth Maul. Even now, 16 years later, that scene still moves me….

Comng back to the present…

There is alot I could say about TFA. We are introduced to some familiar faces. Harrison Ford and Peter Mayhew return as Han Solo and Chewbacca. Carrie Fisher is back as General Leia, and Mark Hamill makes his return as Jedi Master Luke Skywalker. Needless to say, Han is still a suave pirate, conning every group in the galaxy. After ROTJ, it was natural to assume that Han and Leia would live happily every after, and have a bunch of kids sensitive to the Force (She is a Jedi after all).

Not so. Thirty years on, Leia and Han are no longer together. He is doing what he does best, with his partner in crim, Chewy… And she is doing what she knows.. Leading the resistance against the new threat.. The First Order…

There is a new menace in town, going by the name of Kylo Ren (Ben Solo). The son of Han and Leia. Kylo is hellbent on completing what his grand-father, Vader could not do. Whatever that may be…. (Have to remember that Vader was being stringed along by the puppet-master Sidious).

Although the actor (Adam Driver) did a good job of the portrayal of Ren, it is plainly obvious that the character knew little about his grandfather. Vader turned to the Dark Side thanks to the constant mind-games of Darth Sidious. (Not to forget that Sidious was always contradicting himself at every turn)

Accompanied by fits of rage whenever he couldn’t get his own way, Kylo Ren came across as nothing more than a tantrum child who needed to be taken out to the wood-shed and given a good ol’ fashioned whipping. (Maybe his parents needed to enforce more discipline on the brat in his younger years). There were moments when Kylo Ren seemed to be quite the intimidating figure, and rather cool when he was able to freeze blaster fire, but let’s be honest. His skills with a lightsaber were amateur at best. To quote Vader “He’s as clumsy as he is stupid“… 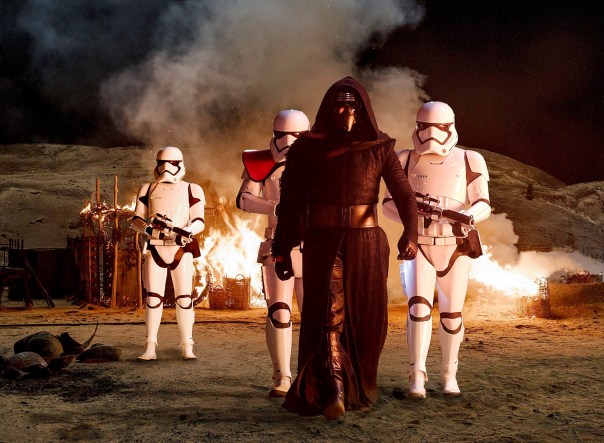 Which brings me to the next point… Kylo Ren’s master is Supreme Leader Snoke. (Anyone else get the feeling with a name like that he’s related to the Snorks)

There are a lot of rumors about who this character is. Some say he is Darth Plagueis The Wise, others say he is Voldemort… You decide… Whoever this character is, one thing is certain. He is a master manipulator of the Dark Side, maybe even more powerful than Sidious. Which does raise an interesting debate… If Snoke is indeed Plagueis, then he certainly did a half-assed job on training both his apprentices.. (If you remember, he trained Sidious, who later turned on him and supposedly killed him in his sleep, then trains Kylo, who has constant fit of rage). With that said, he maybe a powerful agent of the Dark Side, but his skills in training are absolute crap.. Maybe he needs some training himself about how to lead a team. I’m sure a weekend at a Tony Robbins camp would bring a new perspective on how to be an effective teacher:)

Back on topic… The storyline was great. There is certainly a lot going on here. We’re introduced to the new heroes of the film: Finn (A stormtrooper who defects to the Resistance), Rey (A force sensitive who proves she is quite skilled with a lightsaber), Poe Dameron (A pilot who proves he is just as good as Wedge Antilles) and of course not to forget the new Death Star, the Starkiller Base, (which is much larger than the Death Star from ROTJ).

There was a moment that made my blood boil and I almost screamed out “Nooooooooooooooo!”. But, who gets killed I won’t say as I don’t want to spoil it for you. Lets just say you can see for yourself.

Whatever rumors you may have heard about Luke may be true, depending on whose point of view you have read. I will say that Luke doesn’t get much in terms of screen time, but you can see from how the movie ended that he will be a major player in the next instalment.

There were a few moments when more explaining was needed, but I guess those things will be revealed in Star Wars Episode VIII.

Verdict: The Sith Will Rise To Rule The Galaxy..And There Will Be Peace…..
Rating: 8 out of 10.