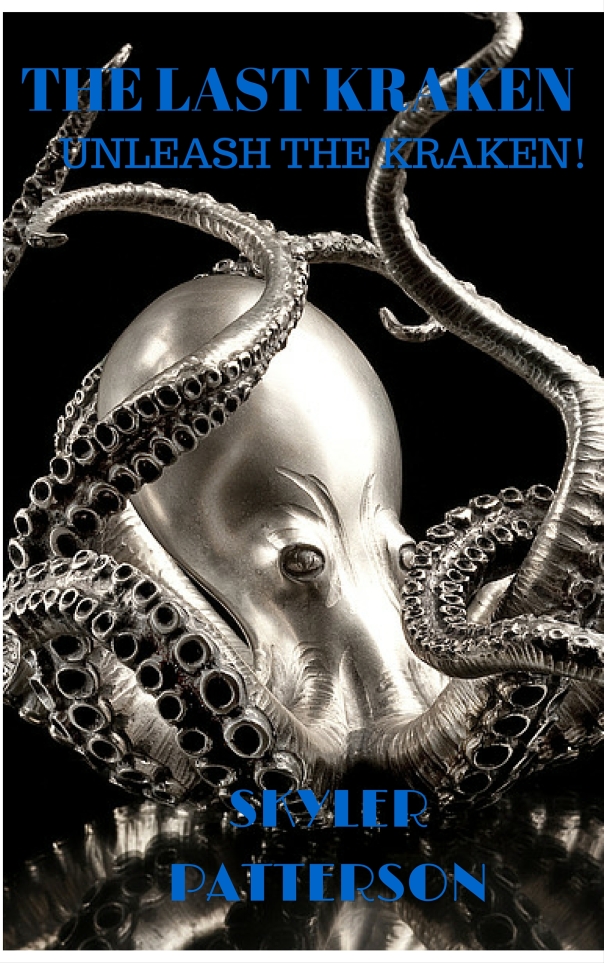 This is a fantasy fiction tale. Get ready to UNLEASH THE KRAKEN! Its the 1800’s in London England. .A leviathan hunter Slaymore Seaborne is retired. The man longs for one last sea adventure! The man has slain every type of sea creature but one. The KRAKEN! All say the creature is myth until the king’s merchant ships turn up destroyed. The crown hires Slaymore to end the monster. This book was written by SKYLER PATTERSON, Author of :THE BOOK OF SWORDS series!

How did I become a writer? My story could be a book of itself. My journey is as daunting as it is impossible. Yet it is all truth! I have been working in health care for many years. It was when I decided to read books on my way to work that I stumbled upon the possibility of writing.

How did it happen? I take the train to get to my job in N.Y.. I had become bored with reading the daily newspapers. It was then that I decided to read a book instead. Mind you, I had not read a book in years! I proceeded to read books by J.R. Tolkien, Anne Rice, Bram Stoker, and George R.R. Martin. I found those books sooo cool! I love fantasy fiction. It was when I became addicted to a certain series; that it happened. I read every book from that series and when I asked the book store clerk when there would  be more the man gave me terrible news. “Ha, that guy puts out a book every five, six years. “WHAT?! LIFE IS TOO SHORT”! I could not believe that. It was then that I began to wonder what if I (yes me) could write a book myself. This was a joke to me until I came up in minutes with a plot for a fantasy fiction tale. HOW did I do that!? The plot was way TOO COOL to just do nothing with.  And I will not lie. I made every type of mistake one could make in learning how to write. I have had no formal training and I successfully dropped out of college, years ago! (Please do not do this! It did not go well!) That first idea became THE BOOK OF SWORDS, a medieval styled swords and sorcery epic. That book gave me many headaches, before I figured out how to write it! (great e-book that it is). So I took a break and wrote: THE LAST KRAKEN, (The complete version on Draft2Digital/Smashwords/I-Tunes, only) a tale of a giant, leviathan squid running amok, in the 1800’s England. It was when I was writing that book that I began to realize that I had somehow in only  a little more than a year (2013) became an author. I finished that first book. I then proceeded to test a chapter of it on my extra –smart-school teacher sister Carol. My sister invited me over to hear my tale. My sister did not disappoint me. She gave me many words of encouragement: “Let’s all have a good laugh”! were her words! I read her a chapter. After I read that chapter my sister began to stutter and jaws were dropping everywhere! “HOW IN THE HELL”?! were her words! And then I began to write another book called REVENGE OF THE WOLF.  When my friends heard I was attempting this task they said: “You are crazy! All of your books (so far) are about action! What do you know about romance books”?! Who would do what I did?! It was crazy! I decided to become a writer not knowing if I could even do it! I who had never wrote any type of romance before did write that book! And what happened?! Four star reviews! And accolades and something I never had before: FANS! AND SALES! (Enchanted helped!) I can still remember when I was writing REVENGE OF THE WOLF (Draft2Digital/Smashwords/ Apple I-tunes) when I passed my laptop to a girl I was dating and asked her to read an emotional turning point of this Paranormal/romance/action/horror story. As she was reading it; I was in awe as the woman slowly began to cry! I then spent the rest of that year writing many books. And here I am! I am in this for the long haul. I am now an author and somehow a poet/songwriter.  I will now do my best to write many stories that all occur in different settings, worlds and time periods. All will contain my signature of fantasy fiction, Epic action and romance! “My impossible journey just goes to show that one can never truly know what they are capable of; until they give it that one good try!  Never let ANYONE tell you what you cannot do! I can be found on Goodreads Author page/Smashwords author page/Facebook Author page. I love to hear from my fans! What’s next?! Romance/Action :REVENGE OF THE WOLF2 (New Series) YA:THE WARPATH OF LOVE, THE BOOK OF SWORDS 2,THE BRAVE CRAB, “211” And many more! I can truly say I LOVE WRITING.—SKYLER PATTERSON