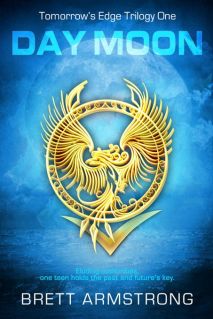 In A.D. 2039, a prodigious seventeen year old, Elliott, is assigned to work
on a global software initiative his deceased grandfather helped found. Project Alexandria
is intended to provide the entire world secure and equal access to all
accumulated human knowledge. All forms of print are destroyed in good faith, to
ensure everyone has equal footing, and Elliott knows he must soon part with his
final treasure: a book of Shakespeare’s complete works gifted him by his
grandfather. Before it is destroyed, Elliott notices something is amiss with
the book, or rather Project Alexandria. The two do not match, including an
extra sonnet titled “Day Moon”. When Elliott investigates, he
uncovers far more than he bargained for. There are sinister forces backing
Project Alexandria who have no intention of using it for its public purpose.
Elliott soon finds himself on the run from federal authorities and facing
betrayals and deceit from those closest to him. Following clues left by his
grandfather, with agents close at hand, Elliott desperately hopes to find a way
to stop Project Alexandria. All of history past and yet to be depend on it.

Prologue: InheritanceThe drizzle tapped on the coffin with an increasing intensity. A steady rain
soon began, its great droplets gently touching the mourners with icy
insistence. None of it seemed real to Elliott. He looked at the mounded soil,
the great wound in the earth where the coffin was positioned, ready to be
lowered at any time. Rain was sliding off its slick grey surface, as though
nature wished to wash all of this away.

Arranged in a semi-circle around the casket were all those who cared enough
about Elliott’s grandfather to make the trip out to this relatively obscure
plot of land. No one gave it much attention throughout the year. Buried deep in
the woods atop a steep, Appalachian hill, the cemetery had no road. Even the
paths were overgrown. Every one of the attendees had been forced to make the
trek in their uncomfortable finery. Like shadows dancing from a flame, they had
made the journey, full of complaints.

Elliott glanced at those gathered: aunts and uncles, cousins, and a variety
of other relatives whom he couldn’t identify. His parents were somewhere,
speaking with the attendees, trying to hold the family together in light of the
sudden affair. No one had expected the accident. There wasn’t even an
opportunity to look at the body; so charred and mangled had his grandfather’s
body become as his vehicle careened off the road.

Everything about the accident felt so impossible. Nothing more so than this
moment. With the rain’s persistence, they were already beginning to lower his
grandfather into the gaping, muddy maw.

Soon the arguments over who got what would begin. His grandfather had a
will, but no one cared what it said, so long as they got their fair share.
Elliott had already overheard grumbles that he was getting a rare item, one of
the few enduring volumes of Shakespeare’s works. It had been a favorite of his
grandfather. Even for its rarity, it wasn’t worth anything. The global
initiative his grandfather had been working on, Project Alexandria, required
all print materials to be recycled as soon as their contents were added to the
system. A single repository of human knowledge, from the beginning of recorded history
to the present. Whoever had the book would simply have to part with it sooner
or later. It didn’t matter.

A tear tried to fight its way through Elliott’s rigid guard. Clenching his
hands into fists, he took a shallow breath, and blinked it back. There was only
one other person who could have felt close to what he did. Shortly, all of the
others wandered away, seeking cover. In their absence, Elliott could clearly
see his cousin stood by the hole, planted like the many stone fixtures around
them. John was twenty-seven, almost ten years older than Elliott, and had
already lost his father, Elliott’s uncle, some years earlier. John’s attention
was fully on the descending form of their grandfather’s casket. The thought of
this forced Elliott’s head round, briefly, to look in the direction of his
uncle’s tombstone. It was in danger of being overtaken by honeysuckle vines.
Even in the strengthening shower, the scent of the buttery hued blooms filled
the air.

Elliott was tempted to walk over to the small granite block and push away
the encroaching plant. Try as he might, he couldn’t bring his legs to move in
that direction. If no one acted soon, the messages on the stone would be
obscured:

Uncle Al had died four years ago, to the day, of some exotic respiratory
disease that had spread from central or southeast Asia; a mini-pandemic. If he
hadn’t been overseas on business, he might never have contracted it. Now, all
that would be remembered of him was that in his fifty-two years of life, he
pursued greatness, to say nothing of ever laying hold of it.

Rubbing his arms, to bring warmth to them, Elliott turned back around and
finished his journey to John’s side. The brawny man was still looking down into
the hole to where the casket had finished its descent. John’s blue eyes never
wavered from their hold on the burial pit. Slowly, John reached out his large,
work-worn hand, gripped a handful of the dirt in the mound beside him, and
stared at it a few seconds, before gently lofting it into the grave.

Brett Armstrong, author of the award-winning novel, Destitutio Quod
Remissio, started writing stories at age nine, penning a tale of revenge
and ambition set in the last days of the Aztec Empire.  Twenty years
later, he is still telling stories though admittedly his philosophy has
deepened with his Christian faith and a master’s degree in creative
writing.  His goal with every work is to be like a brush in the Master
artist’s hand and his hope is the finished composition always reflects the
design God had in mind.  He feels writing should be engaging, immersive,
entertaining, and always purposeful.  Continually busy at work with one or
more new novels to come, he also enjoys drawing, gardening, and playing with
his beautiful wife and son.