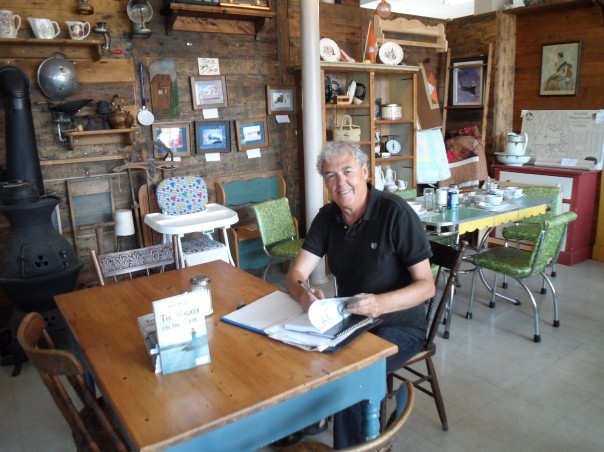 Mike Martin was born in Newfoundland on the East Coast of Canada and now lives and works in Ottawa, Ontario. He is a longtime freelance writer and his articles and essays have appeared in newspapers, magazines and online across Canada as well as in the United States and New Zealand. He is the author of Change the Things You Can: Dealing with Difficult People and has written a number of short stories that have published in various publications including Canadian Stories and Downhome magazine.

The Walker on the Cape was his first full fiction book and the premiere of the Sgt. Windflower Mystery Series. Other books in the series include The Body on the T, Beneath the Surface, A Twist of Fortune and A Long Ways from Home.

A Long Ways from Home was shortlisted for the 2017 Bony Blithe Light Mystery Award as the best light mystery of the year. A Tangled Web is the newest book in the series. 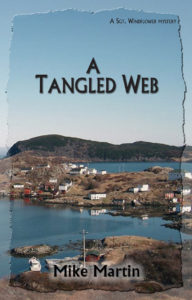 Life is good for Sgt. Wind­flower in Grand Bank, Newfoundland. But something’s missing from the Mountie’s life. Actually, a lot of things go missing, including a little girl and supplies from the new factory. It’s Windflower’s job to unravel the tangled web of murder, deceit and an accidental kidnapping that threatens to engulf this sleepy little town and destroy those closest to him. But there’s always good food, good friends and the love of a great woman to make everything better in the end.

Find out more about when this book will be released at

“Life doesn’t get much better than this,” said Winston Windflower. The Mountie looked over at his collie, Lady, who wagged her tail at the sound of his voice. If dogs could smile, she smiled back. His world was almost perfect. He had the love of a great woman and a good job as a Sergeant in the Royal Canadian Mounted Police patrolling one of the lowest crime regions in the country. Plus, the weather had been mild so far, at least for Newfoundland in early December, and that meant no snowstorms with forced overnighters at the detachment. Life was very good indeed.

He had good friends, including Lady, who was amongst the best of them. And he had a child on the way. His wife, Sheila Hillier, was pregnant and at the clinic for her three-month checkup. He was waiting to hear how both Sheila and the baby were doing. His Auntie Marie had told him the baby was a girl, and if anyone knew about these things, it was his Auntie. She was a dream weaver, an interpreter of not just dreams but of messages from the spirit world. Windflower had recently spent a week with her and his Uncle Frank, another dream weaver, to learn more about the dream world.

Interpreting dreams was part of his family’s tradition. But it was an imperfect tool that gave information, not always answers. Perhaps the most important thing he learned was that dreams do not predict the future. Instead, as his Auntie told him, “Dreams tell us about our past, what has already happened. They also point to actions we should take if we want to get the right result in the future and to the signs all around us that we need to follow.”

Windflower was contemplating that piece of wisdom when he noticed a very distraught woman get out of her car outside the RCMP detachment in Grand Bank. She ran towards the front door. He walked out to meet her, but the administrative assistant, Betsy Molloy, beat him to it.

“There, there now, Molly. What’s goin’ on?” asked Betsy as she put her arms around the other woman and guided her to a seat in the reception area.

“It’s Sarah, she’s gone,” said the other woman between sobs. “I told her to stay close by the house where I could see her. I went out back to put the wash on the line. When I came in, she was gone.”

“Okay, Mrs. Quinlan,” said Windflower as he knelt down beside the two women. “How old is Sarah?” He didn’t really need to know how old the girl was. He wanted to help the mother calm down so she could give them as much information as possible.

“She’s going to be six next month,” said Molly Quinlan. “She’s growing up so fast. But she’s still such a little girl. And now I’ve lost her. Brent is going to kill me.” She started sobbing again.

“What was she wearing so that we can help find her?” asked Windflower, trying to get information but also trying to help Molly Quinlan feel useful.

The woman stopped crying and said her daughter was wearing jeans and a favourite t-shirt. “It was pink and had sparkles. She said it made her feel like she was a princess. And she had her light blue jacket on with a hood.”

Windflower smiled. “I’m sure she’ll show up soon. But let’s go over to where you last saw her, and we’ll start looking. She can’t have gone far. Leave your car here, and come with me. I’ll drive you over.” The woman smiled weakly at Windflower through her tears and allowed him to take her arm and guide her to his Jeep outside the door.

He returned inside to give directions to Betsy. “Get Constable Smithson in here. I’ll call Frost and get him to come in from his rounds.”

Betsy nodded her agreement, and Windflower went outside to drive Molly Quinlan home.

Meanwhile, it turns out, Sarah Quinlan was fine, perfectly fine. She had wandered a little way from home in the centre of town. She was going to go down to the nearby brook to feed the ducks. She knew better than to go into the water, but she couldn’t see any reason why she couldn’t just look. She’d done it before, and nobody seemed to mind. As long as she didn’t stay away too long, everything was okay.

Sarah had that great fearless attitude of a child who grew up in a small and very safe community. She knew most of her neighbours, and they all watched out for her. She also had the natural curiosity of little children, especially when she saw something new. The truck parked on the roadway above the brook was new, so Sarah went to take a closer look. Even better, the back door of the truck was open, and there was a ramp leading inside. This was certainly worth a closer inspection.

Sarah Quinlan was having fun exploring the back of the large truck when she heard a loud, rumbling noise. She didn’t know it, but the driver had started the engine. It was so loud, and Sarah was so frightened by it, she froze. The next thing she remembered was everything going almost completely black and the back door of the truck slamming shut. She cried out, but by then it was too late. Seconds later she, the truck and the unsuspecting driver were barrelling out of town and onto the highway.

Windflower drove Molly Quinlan to her house and got her to show him where Sarah had been playing. Together they walked through the house to see if the little girl had come home and hidden there. But no such luck. While they were searching the house, they were joined by two of Quinlan’s neighbours who took over Molly’s care and made her a cup of tea. Soon afterwards Constable Harry Frost arrived from his highway patrol.

Windflower gave him a quick update and directed him to go to one end of town to start the search. He would begin the house-to-house search through the neighbourhood when Smithson showed up.

He first checked out back and looked in the storage shed, a favourite hiding place of every little kid and probably where Windflower himself would have taken refuge. But Sarah was not there. As he went to the front of the house, Constable Rick Smithson showed up.

“Afternoon, Boss,” said Smithson. “Any sign of her yet?”

Windflower shook his head. “Frost is doing the big circle search. You and I will start the door-to-door. Ask them if they saw the girl this afternoon. I’ll start from here. You go down to the brook, and work your way up.”

Smithson returned to his cruiser and sped off. Windflower wasn’t worried. Yet. But he knew that the first few hours were crucial in finding a missing child. If they didn’t, then it was almost always something more serious. Not time to panic, but no time to waste. He walked up to the first door and knocked.