SOUP: THE FUTURE IS PAST AND PRESENT

SOUP The Future Is Past and Present

Scott Yonge exploded onto the national consciousness at the 2001 Garrett Awards and quickly rose to legendary status on the wings of his music and his whirlwind romance with independent film actress Michelle Zoe. What should have been a perfect life was interrupted by an ultra-right wing militant group called the American Freedom Force and its leader, Colonel Randall, who forces Scott to choose between his life and that of his son. After his heroic sacrifice, his family is left to pick up the pieces and forge ahead to a future in the vacuum he left behind.

Now, in 2021, his son Hedley inherits music for himself, becoming a star in his own right as technology gives new life to the medium. Scott’s daughter, affectionately known as Soup, throws herself into unravelling the mysteries of her family’s history. Michelle commits herself to keeping them all together and trying to make sense of life without the one she loves. Through it all, the AFF looms in the shadows, threatening to resurrect the pain they have just begun to overcome. 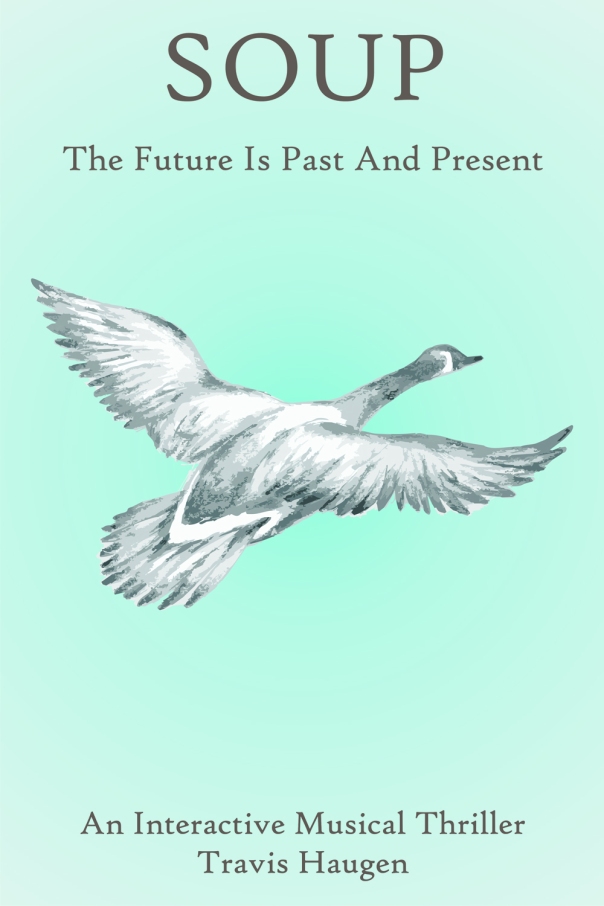 The weekly outing had become something of a ritual for them. Friday nights, after supper, they would head out to the country with their hearts pumping and the radio blaring, riding on a wave of blinding optimism. They’d drive for hours, most times talking and laughing about nothing at all. Other times they’d settle into a comfortable silence, speaking without speaking.

They’d been silent for some time when the boy was drawn in by a pretty song on the radio. She was lost in it too, absorbed as though in a trance. The boy looked to his mother. She looked back with warm sadness in her eyes. He felt her love wrap around him as she smiled. She was about to say something when the crunch came. The boy could almost hear the sound of her silent scream as her head snapped to the side at an impossible angle. That’s all there was. He never got to hear what she wanted to say.

Travis was born and raised in the prairies of Saskatchewan, lived in Calgary for over 25 years and presently lives in Winnipeg, Manitoba.

Travis Haugen has spent forty years of his life touring on the road as a musician and has spent hundreds of hours in recording studios. Travis spends much of his time writing songs, writing stories, playing music and spending valuable time with his family and close group of friends.

Where Soup Is Sold:

Travis Haugen will be awarding a $30 Amazon or Barnes and Noble GC to a randomly drawn winner via rafflecopter during the tour.
Enter to win a $30 Amazon/BN GC – a Rafflecopter giveaway

Thanks Travis for being here today. Tell us about you as a person.

All the things that I do, stem from music. I work as a computer consultant during the day. I got into computers through music. When the first digital audio work stations came out, I had to learn to run them on my own. The computer stores were not interested, there was no money in it for them, so I spent many an hour in the early days figuring the darn machines out. From there it led to what I do for a day time job. I am also an avid postal history collector. I specialize in the 1870-1897 Canadian Small Queen (Victoria) issue. My work with computers mingled with my love of collecting. I have conducted philatelic internet auctions for Bow City Philatelics since 1989. Another aspect of my life that defines me, is that I do not drive. I had eye operations in 1980 that left me clinically blind at the time. As a result, I took to a bicycle for my means of transportation. It was the best thing that could have happened to me. I ride 365 days a year, rain, snow or shine, and the benefits to my health, physical and mental, are invaluable.

Without question, Albert Einstein! I think he has the best mind of the past century. To think that he came up with the theory of relativity in his spare time, while working as a clerk, is rather astounding. But beyond that, his love of humanity, and his search for peaceful means to bring us all a better life define him as a great human being. He was a kind, gentle, humble man, with a great intellect, and was a hell of a violinist to boot!

SOUP is the third book in the One Song series, and the first to be published. I spent 40 years of my life as a professional musician, touring Canada and the United States. Those were great times. I wanted to share those times with people, so I took those experiences and wrapped them around a fictional character named Scott Yonge, then wrapped Scott Yonge around a story of mystery, suspense, intrigue, family drama, romance, and a touch of comedy.

SOUP is the continuing story of the second generation of the Yonge family.

I do most of my writing while riding my bike back and forth to work. Be it music or prose, the inspiration hits me while doing other things especially riding. My mind relaxes and allows the inspiration to create the song or the story in the background while I float through the air on my bike. Later when I get home, I sit down to the computer for the prose, or a guitar or piano for the music and lay down what came to me throughout the day.

The story revolves around Scott Yonge. Scott was a Canadian Prairie boy who lost his father to alcohol, lost his mother in a car crash at the age of 10, and hit the road at the age of 14 when his only remaining relative died. He remained on the road, for many years before ending up at the 2001 Garrett Awards in Los Angeles. That night changed his life as well as the life of those around him and the woman who would become his future wife, independent actress Michelle Zoe, who was a presenter at the awards that night.

When I think of Michael J Fox in his roll from Back To The Future, I see the sensitivity, the positive approach to life and his sense of comedy portrayed in that movie as the qualities I would like to see in the actor who plays Scott Yonge.

The Book OF JOY by The Deli Lama and Desmond Tutu.

I can wiggle my ears, and of course, I can sing, and play a variety of instruments.

I think the power of positive thinking is the greatest power of all, and you don’t have to be a super hero to possess it. It is a trait, one that can be learned.

This quote from Thomas S Monson says it all:

The Past is behind, learn from it

The Future is ahead, prepare for it

The Present is here. Live it