Book Blast – Dreams That Never Were

Greg Messel grew up in the San Francisco Bay Area and lives on the Puget Sound in Edmonds, Washington, with his wife, Jean DeFond. Dreams That Never Were is his 11th novel and is a historical fiction account of a young reporter caught up in the events surrounding the assassination of Sen. Robert F. Kennedy in 1968. Greg has also written a series of mystery novels set in San Francisco in the 1950s. He has lived in Oregon, Washington, California, Wyoming and Utah and has always loved writing, including stints as a reporter, columnist and news editor for a daily newspaper. Greg won a Wyoming Press Association Award as a colunist and has contributed articles to various magazines.

On June 5, 1968 Senator Robert F. Kennedy, then a candidate for President, is mortally wounded by assassin Sirhan Sirhan in the Ambassador Hotel in Los Angeles. Among the innocent bystanders who were also shot that night is a young idealistic reporter from San Francisco, Alex Hurley.

The tragic incident changes his life as he’s swept up in the turbulent events of 1968.  Alex is conflicted about the Vietnam War after spending several months there as a reporter. The war costs him his first marriage and threatens to tear his family apart. However, he meets a woman who’s love restores his hope and together they forge a new life set against the backdrop of the war, the civil rights struggle and political upheaval in the San Francisco Bay Area.

The title comes from a famous quote of Robert F. Kennedy’s “Some men see things as they are and say, ‘Why?’ I dream of things that never were and say, ‘Why not?’”

“He’s starting to open his eyes,” someone said.

I detected a pain in my side, just below my rib cage. I tried to open my eyes, but they seemed to be glued shut. The voices resumed—talking about me as if I wasn’t there. Finally, I blinked my eyes, trying to focus, and soon realized  I was in a hospital bed. Standing by me, with concerned looks etched on their faces, was an odd collection of people from my life.

Through my bleary eyes, I saw my ex-wife Brenda; John Greer, my photographer pal from San Francisco; and Darlene Harvey, the reporter from the Los Angeles Times, I’d been admiring from afar since I had arrived in Southern California.

Brenda moved forward and tenderly gripped my hand in a way that she had not done for a long time.

“How are you, Alex?” she asked softly.

I gave a weak shake of my head. “I dunno. What happened?”

“Remember what?” I mumbled blankly, as my weak voice tailed off into nothing.

“He’s still coming out of the drugs. Give him a minute,” Brenda pleaded. “They’ve been keeping him kind of doped up since the surgery. This is the first time I’ve been able to talk to him.”

Brenda shushed me and gently ran her long, slender fingers through my hair. “Take it easy. Don’t try to talk right now. Take your time. Then we’ll help you understand what happened.”

I groggily attempted to get my bearings. “We were at the hotel. Everyone was celebrating Bobby’s victory. I was following him out of the ballroom, and there was like a riot. I was suddenly on the floor and couldn’t get up. It was strange. All of these people kept stepping on me—on my arm and on my legs.”

I glanced at my right hand which was heavily bandaged. “I got knocked down. I’m sorry. Everything is a little hazy. I’m having trouble getting my brain to work.”

The three people hovering over me could not have been more different—two beautiful women and John, with his long black hair pulled back in a ponytail and a scruffy beard covering his face. The trio exchanged concerned glances, whispered, and nodded at one another. I started to shift in my bed and was met with a jolts of pain in my side and my leg.

Brenda attempted to lighten the mood. “I was afraid you’d wake up in your hospital bed, see your ex-wife standing over you, and think you’d died and gone to hell.”

I gave her a weak smile, while the others chuckled to break the tension.

Brenda was trying to make sure my re-entry was a slow descent, but that strategy was quickly dashed when John started blurting out all the details of the last 14 hours. “Take it easy, Alexander. You’ve had surgery. You were shot, man. They removed the bullet. The doc says you’re going to be fine. Some people from San Francisco are on their way down here, including our boss. Everyone’s been worried about you after they saw the news.”

Brenda glared at John. “Way to go slow, John. Senator Kennedy was shot. You and some other people were also wounded by the assassin.”

“No, no, no!” I yelled. “Bobby was shot? No, not this time! This wasn’t supposed to happen! Assassin? Is Senator Kennedy going to be all right?”

“Not doing very well?” I snapped with rapidly accelerating alarm.

John blundered ahead. “This place is like a fortress. It was hard to get in here especially onto this floor. Cops are everywhere.”

“Maybe we should go,” Darlene said shooting a glance at John. “We’ll come back later, Alex. We just had to see you. We were so worried.”

“No, no, don’t leave right now,” I pleaded. I repeated what I had been told to try to take in the enormity of the news. “Senator Kennedy was shot. How could… how did it happen?”

Brenda nodded to John and Darlene. “I’ll stay with him. I know you must be very busy.”

Darlene leaned over and kissed me on the cheek. She was dabbing tears from her eyes. “It’s been a long night. We’re all living in a nightmare. I’m so sorry, Alexander. It’s good to see you awake.”

Darlene grabbed John by the elbow and pushed him towards the door. John flashed a peace sign. “Peace, my brother. I’ll see you a little later. Take it easy and get better. I’ve got to call San Francisco. Everyone’s anxious to hear about you.”

After they departed, I tried to shift to get a better look at Brenda. She looked great. Her long black hair cascaded onto her shoulders. It was longer than I had ever seen her wear it. She wore a lime green mini dress with white trim and white boots.

“Where am I, and what time is it?” I quizzed Brenda. “Actually… what day is it?”

“It’s Wednesday,” she checked her wrist watch. “It’s about a quarter to two.”

“At night? What happened to Tuesday?!”

“You had surgery earlier today, and I just got to town. I came straight to the hospital. I flew down as soon as I heard about the assassination attempt. Your name was on the television as one of those wounded with Bobby. I caught the next plane to LA to see you.”

“I was very upset, and Tom immediately offered to fly me down here to see you.”

“That’s very nice… of you… and your husband.”

“Alex, I don’t think you’ve grasped what’s going on outside this room. It’s a national crisis. I wish you could look out the window at the street below. There are barriers up, and hundreds, if not thousands, of people are lining the street in the front of this hospital. News about the shooting is on TV constantly.”

“Here. Eric Sevareid and Walter Cronkite have been on CBS saying something has happened to the fabric of our nation. There are signs everywhere that say ‘Pray for Bobby.’ The raw footage of the shooting has been shown over and over again on NBC. You’re right. After the shots were fired, it was like a riot. When I turned on my television, not only did I see Bobby bleeding on the floor in the pantry, but I saw you on the ground with a pool of blood under you. You were wearing a blue blazer, lying on the floor on your side against the wall.” 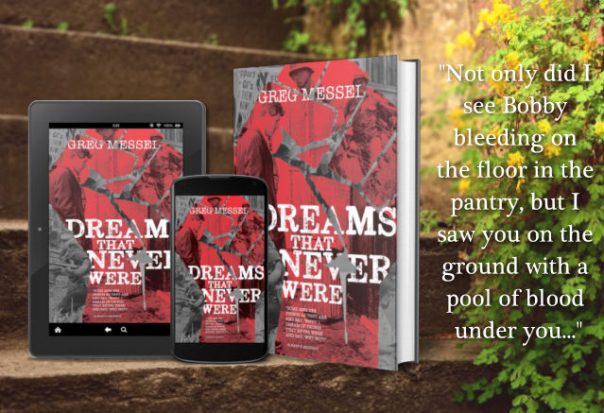