VBT – GODDESS OF THE WILD THING

Goddess of the Wild Thing

Winner of the Independent Press Award and the NYC Big Book Award for Visionary Fiction!

Eve Sanchez, a scholar of esoteric studies, is driven into unreal dimensions of horror and hope as she encounters a seductive and frightening man, criminal lawyer Sam Shear.

Sam introduces Eve to a supernatural world in which the wicked powers of a surrogate mother’s twisted affection threaten love and life. Struggling to sort through right from wrong, frightened yet determined, Eve nears despair.

Goddess of the Wild Thing reveals the dramatic tale of one woman’s spiritual journey where metaphysical happenings, unexpected turns of fate, and unseen forces impact her ability to love and be loved.

In the magical realm of Aztlan del Sur, a mythopoeic land of hidden horrors and guiding spirits, Eve, with three friends and a wise old woman, is caught in an age-old struggle about love—whether bad love is better than no love— and discovers that love is a wild thing. 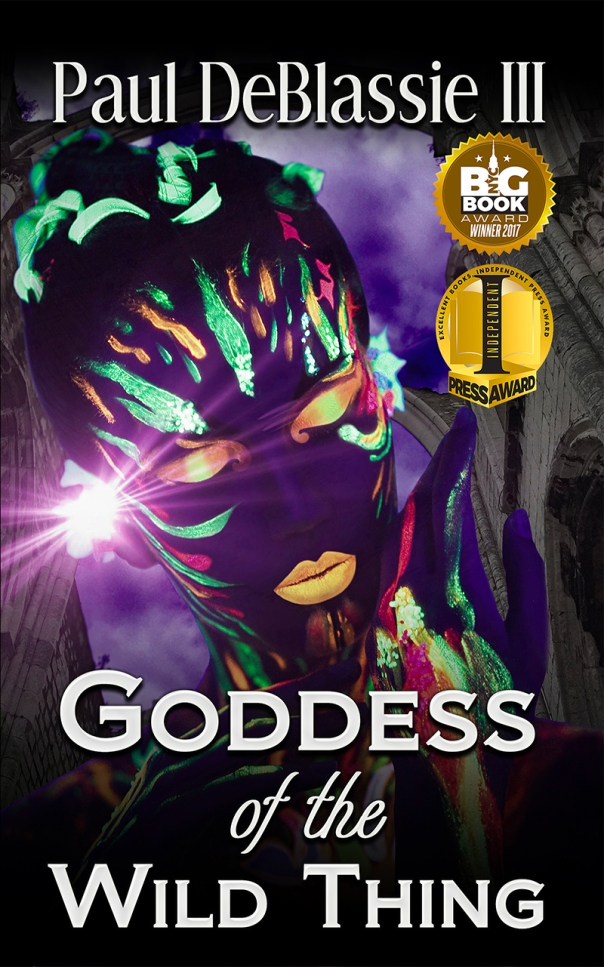 Eve sharpened her focus. She saw the sharp nail of a witch’s right finger tracing Graciéla’s image on a foggy mirror in a grungy bathroom, touching the center of the mirror with a hatred so intense, the glass burned red hot. The mirror in Graciéla’s kitchen cracked. Shards jettisoned at the old healer then were magically warded off and drifted in place about her head and neck.

Graciéla’s energy, tired as she was, had fended off the pointed shards. She hadn’t been impaled. But the strain had ushered her from one world to the next. Death came not by the hand of another but by a weakened mind and body defending itself.

Eve, shaken, allowed her soft touch to stay on Graciéla’s forehead, confirming the horror of what she’d seen. Shamanic wisdom, often discussed between the two kindred souls, spoke to Eve as she stroked her friend’s head, remembering that death provided passage for one whose life had been well spent and whose time had come.

After a few moments, she closed her friend’s green eyes and whispered tenderly, “Always my friend, always love, always together in life and in death.” She stood and wiped the tears from her eyes. A gray-brown, green-eyed, great horned owl hooted from the largest cottonwood branch outside the back window.

Eve heard Shirley finishing her call to the EMTs and police, and then walking to the front of the store to await their arrival.

One large shard lay at the end of the table, sharp tip pointed outward. It reflected Eve’s image, a glowing red ember menacingly centered at the brow point.

Paul DeBlassie III, Ph.D. is a depth psychologist and award-winning writer living in his native New Mexico. He specializes in treating individuals in emotional and spiritual crisis. His novels, visionary thrillers, delve deep into archetypal realities as they play out dramatically in the lives of everyday people. Memberships include the Author’s Guild, Visionary Fiction Alliance, Depth Psychology Alliance, International Association for Relational Psychoanalysis and Psychotherapy, and the International Association for Jungian Studies.

Paul DeBlassie III will be awarding $25 Amazon or B/N GC to a randomly drawn winner via rafflecopter during the tour.

Thanks for being my guest today. Tell us about you as a person.
I am a psychotherapist and writer of visionary thrillers. I live with Kate, an artist and my wife of 40 years. We’ve raised four wonderful children – writers and artists one and all.

If you could hang out with one famous person for one day, who would it be and why?:
I’d hang out with the one and only grand master of the supernatural thriller, Algernon Blackwood. He’s an old man with old wisdom about the unseen world and everyday realities.

What’s the story behind your latest book?
In therapy, I help patients through love issues just like what happens in Goddess of the Wild Thing, how it dramatizes what happens more often that we think.

What is your writing process?
An idea springs to mind then, if it lingers over months and sometimes years, I hit the page running and word after word, sentences and paragraphs a story is birthed. Then comes the cleanup – edits, edits, edits, etc. As we all know, the writing is in the rewriting!

Tell us about your main character:
Eve Sanchez, the protagonist of the story, encounters a seductive and frightening man, criminal lawyer Sam Shear. He introduces Eve to a supernatural world in which the wicked powers of a surrogate mother’s twisted affection threaten love and life. The evil woman walks a fine line between sanity and insanity, dark and mysterious happenings in her wake. Where there’s love, there is often a woman who feels spurned and wills the demise of the loved woman. Eve struggles to discover the identity of the evil woman, a fierce battle with an unexpected outcome.

If your book was to be turned into a movie, who would play the lead role and why.
Salma Hayek would propel the drama-filled love story forward with the intensity of her presence and capacity for empathy.

What are you working on next?
The Goddess of Everything is about ready for professional editing, a thriller about mother love gone bad and the need to break free.

What advice do you have for other writers who want to get the word out about their book?
Book pr is a long-term process that is ongoing, daily, and requires consistent commitment and passion.

What is your favorite book on your shelf right now?
Tim Prasil’s, Guilt is a Ghost.

Do you have any special/extraordinary talents?
I love what I do and do what I love!