The Wall
by David Pereda

THOMAS BERTRAM is an American living in San Salvador with his fiancée CECILIA. They own a popular neighborhood restaurant and plan to wed soon. Thomas’s dream is to obtain a resident visa for Cecilia and return to the United States.

DOMINGO JIMENEZ and his wife BLANCA own a small repair shop across the street. Domingo’s dream is to move to America as well so that his seven-year-old daughter NANCY can grow up speaking English and having a good education and a better life than he and Blanca had.

When armed gang members invade their neighborhood to demand “protection” money and threaten them with death if they don’t pay, Thomas and Domingo’s dreams for the future take on a new perspective. They decide to flee the country with their families through Guatemala and Mexico to seek asylum in the United States.

But their journey is more challenging than expected, and they face a myriad of difficulties and must overcome multiple obstacles that put not only their dreams but also their lives at risk.

Thomas’s first impression was that Ciudad Juarez was a city suffering from schizophrenia.

Based on the Reforma newspaper article he was skimming before he fell asleep, the schizophrenia was even more severe than it appeared from the airplane window. According to the report, murderous dark forces moved underground through the city with impunity. Coexisting with a well-educated and law-abiding middle class breathed some of the world’s most feared and violent drug cartels. And while the local police bragged about having achieved a drastic reduction in crime over the past decade, more than 1,000 women had been murdered—and over 3,000 reported missing during the same period.

The article hinted at a police-force cover-up—and even possible police involvement—and blamed the crimes on the transient population seeking to cross the border illegally into the United States. It ended with an impassioned plea to Mexican authorities.

As the jetliner banked for a runway approach, he spotted some of the transient population described in the article. Small groups of people dotted the protracted chain-link fence, plastic bags either slung over their shoulders or resting on the ground at their feet. Thomas wondered how much the article’s writer had been paid to blame those poor souls whose only desire was to find a better life in the United States.

Cecilia saw them too. “What are those people doing?”

“Waiting for night,” Thomas said as the plane straightened, and he lost sight of the fence. “To cross to the other side.”

The pilot landed with a jolt. After a couple of bounces that elicited frightened cries from alarmed passengers, the aircraft rolled to a stop on the tarmac in front of an oblong cream-colored building. Cecilia, Alex, and Thomas deplaned and were guided toward one of the doors by uniformed immigration officials. The sun was so hot that Thomas’s skin crinkled.

“We have to go through immigration?” Thomas asked, raising an eyebrow. “I thought we were in Mexico.”

“Border towns in Mexico always check your documents,” Alex said. “I don’t know why. I guess it’s in case you’re planning to cross into the United States illegally.”

Cecilia glanced at Thomas with concern, and he noted the dark circles under her eyes. 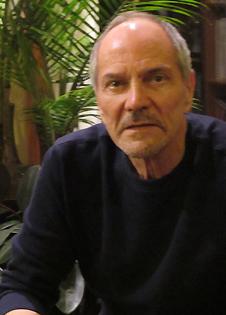 David Pereda is the award-winning author of eleven thrillers and mainstream novels. His books have won the Lighthouse Book Awards twice, the Royal Palm Awards, the National Indie Excellence Awards, and the Readers Favorite Awards twice. He has traveled to more than thirty countries around the world and speaks four languages.

Before devoting his time solely to writing and teaching, Pereda had a successful international consulting career with global giant Booz Allen Hamilton, where he worked with the governments of Mexico, Venezuela, Peru, and Qatar, among others.

A member of MENSA, Pereda earned his MBA from Pepperdine University in California. He earned BA degrees in English literature and mathematics at the University of South Florida in Tampa. He loves sports and has won many prizes competing in track and show-jumping equestrian events.

Pereda lives in Asheville, North Carolina, where he teaches mathematics and English at the Asheville-Buncombe Community College.

Visit him online at: www.davidpereda.com

David Pereda will be awarding a $25 Amazon or B/N GC to a randomly drawn winner via rafflecopter during the tour,

Tell us about you as a person.

Here are three things about me that people may or not know:

1-My most successful book is one my fans have probably never read, or, if they did, they didn’t think I wrote it. The book sold 50,000 copies. I wrote it under a pen name, which I won’t disclose, and it was an erotic novel.
2- English is my second language. I’m an immigrant myself, which helped me identify with the characters when writing THE WALL. I was a penniless nineteen-year-old non-English speaker when I arrived in America, clutching my immigration papers.
3- I’m a cowboy at heart. I love the cowboy ideal, whether real or not—honesty, loyalty, and courage. In my teens, I dreamed of running away to Canada and becoming a cowboy. I still dream of owning a ranch with horses and cattle and living a cowboy life.

Genghis Khan, if he could come back from the dead for one day. I would love to spend a day with him riding on the steppes of Mongolia, listening to his stories. Although he is vastly unrecognized in the west, and until recently not given the importance he deserved in China, he is the most successful conqueror in history.

He began his incredible rise to power as Temujin, a thirteen-year-old persecuted by a minor chieftain who had just murdered his father, another small chieftain. Mongolia at the time was a collection of petty chieftains constantly warring with each other.
During his lifetime, he united the entire Mongol nation and became Genghis Khan. His armies were never defeated, and he conquered most of the known world. His empire lasted 600 years.

Unlike other conquerors, his significance extended far beyond warfare. Some of his achievements include the following: a code of law, later used by Napoleon; a way of communicating quickly with his generals imitated as the Pony Express in the old west and by Hitler during World War II with his rapid attack; instituted meritocracy instead of class distinction in his armies; created war tactics later used by known generals; developed engineering feats capable of overcoming walled cities; began the first known spy assembly in the world to collect information about the places he planned to attack.

I could go on and on with his achievements; there were so many. I would be thrilled to gallop on the Mongolian steppes alongside him, just listening.

I owe this novel idea to my students. During the past fourteen years, I have taught English to thousands of students from all over the world. They shared their usually happy, sometimes sad, but always poignant and courageous stories of coming to America. Over the years of listening to their stories, I felt the need to write a meaningful but entertaining novel that would address controversial immigration problems in our country but wouldn’t preach. THE WALL is that novel, and many of the most dramatic episodes described in the book happened.

I write my best between 2:00 and 7:00 in the morning when everything is quiet.

During the workweek, I roll out of bed between 1:30 and 2:30. I have a quick breakfast and work until 6 or 7 am, shower, get dressed and start teaching at 8. At night, I sleep maybe 2 hours, sometimes 3. In the afternoon, between classes, I sleep one or two more hours. During weekends, I may linger writing and checking emails until later.

It is now precisely 2:11 on Saturday morning. I’ve been answering your questions since 1:30.

Tell us about your main character:

Here my answer may shock you or sound arrogant. If so, I apologize; it’s not my intention. The two main characters in THE WALL, Thomas and Alex, are extensions of my personality. Like Thomas, I’ve been poor to the extent of going hungry at times; like Alex, I’ve been very wealthy and married to a royal and hobnobbed worldwide with European nobility. Like Thomas, I’m loyal and methodical; like Alex, I’m dauntless and love wine and women and danger.

In my youth, I was more like Alex. I have become more like Thomas in my later years, but I often feel Alex’s presence in the background, waiting.

My next novel, GOLDEN, is scheduled for publication in 2022. I’m halfway through it now. The first chapter is included at the end of THE WALL.

First, make sure what you want to share with others is well written and worth reading.

Second, believe in yourself and remember Og Mandino’s wise words, “Of small attempts, repeated, comes down the mighty oak.”

My favorite book is and has been for a long time The Sun Also Rises, the first novel published by my favorite writer, Ernest Hemingway. I believe it is his best novel

I have an I.Q. of 160. I have set records in the 100m, 200m, and 400m sprints in three age groups and have a box full of medals to prove it. In another container, I have multiple awards earned at show jumping equestrian event competitions. In addition, I’m good in mathematics (I teach math at a community college) and languages (I speak four of them).

A mind so powerful that it would allow me to understand the complexities of our world to improve it to the benefit of humanity.

List 5 things on your bucket list:
• A trip to Mongolia in summer to search for the tomb of Genghis Khan
• Spending a summer on a ranch as a cowboy
• Riding the Orient Express
• Visiting Eastern Europe, especially St. Petersburg in Russia
• To repeat a trip I took years ago to Copper Canyon