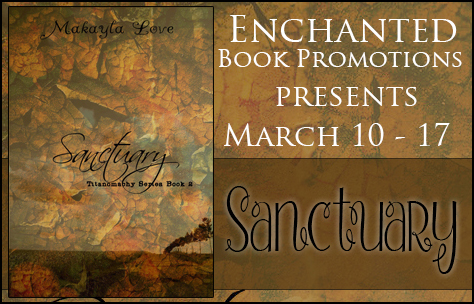 Shiloh isn’t adjusting well to her new life in Ironbridge. Life isn’t how she always imagined it would be, and every day is harder than the last. Things only get worse when a small family on their way to a settlement called “Sanctuary” shows up on Shiloh’s doorstep looking for an escort the rest of the way. But Sanctuary isn’t all its supposed to be.

When they find themselves trapped, every second becomes a fight for survival. Can they find a way out before one of them falls to a mad tyrant? Or will their little group be broken up forever?

Makayla Love is an aspiring Harley Quinn-esque super villain who has decided to spend her time between nefarious schemes by writing paranormal novels in her lair somewhere in the general Kansas area. She enjoys sit-coms and doesn’t have enough shelf space for her ever multiplying collection of books.

Late afternoon set in and I decided to put forth every ounce of energy and strength still in my body and sit up.
With that much accomplished, I made my next goal getting up onto my feet.
Doing good so far. I ought to try going somewhere . . . doing something. But what? The laundry needed done but it was far too much effort to fill the wash basin and scrub what few precious pieces of clothes we had. I could do an inventory on our supplies—which would be an easy enough job. I just had to count. Okay, I could do that.
I ended up being rather proud of myself when I finished the task. At least I did something.
Momentum is something best not lost. So while I still had it in me to keep moving even when I didn’t want to I found one of my embroidery projects. I took it out onto the porch after turning the gramophone radio on. By then the air was stifling and I had soaked in sweat since noon. After Garth was home for a while—
(If he comes home at all.)
–when he decides to go back out again—
(Again? He might not come back this time.)
—I could ask him to look for an electric fan for me. It would be nice to set it up in the house and try to cool it down some. But for now there was no reason to sit inside. If I wanted to feel better, I had to create the conditions for it. I had to put forth the effort to stop being like this if I wanted to—
(You’re never going to feel better)
—change my attitude. I needed to relax, to find—
(There’s only one way to make it stop. There’s only one way to end the pain for good.)
–peace.
I had to create a sense of normalcy. Before Rilei and I came out here most of my days were filled with needlework and music and books. I had plenty of books but my needlework had been neglected. A lady can’t be expected to keep up her skills with a needle and thread if she doesn’t practice.

My eyelids fluttered open to a room bathed in the glittering white light of day. Though how late in the day I couldn’t say. It was too bright and hot to be early morning but I didn’t know why I would be allowed to sleep in the way I was. Regardless, I rolled over onto my side and didn’t try to hurry myself to wake up. Why? I already slept much longer than need be. Might as well take my time about it.
Plus the heat kept me too sleepy and stupid to have much of a reaction to anything. Which might’ve been why when I saw Garth hovering outside my window, adorned in one of his shirts with the sleeves cut off so that his well-sculpted arms showed in all their muscular glory, I didn’t think much of it.
How peculiar . . . I thought as I watched him reach his arm up and down. Up and down. Up and down. How does he do that? I think I would want to learn that. It might come in handy someday, to just lift your feet off the ground and fly—
But people can’t fly. Not without the aid of a dirigible or airplane wings or turbine engines.
Everything came at me all at once, and did so with such force that I threw myself out of my bed and at the window.
“Garth! What are you doing?”
He didn’t look at me. “I’m—” He drifted his gaze over to me and whatever he intended to say died in his throat. A shade of bright pink lit up his face as his eyes grew wide and his lips pressed into a thin line. I watched his eyes, which moved from mine to something down . . . lower.
I followed his gaze. When I saw what he was looking at I made an odd sort of sound between a gasp and a scream. In my heat-induced stupidity and the shock of seeing him outside my second-story bedroom window I’d forgotten that I made a habit of sleeping in my bra and panties. I tried to cover my indecency up with my arms but to no avail. At last I drew the curtains shut and hurried to put on something.
Once dressed in my black t-shirt and blue denim shorts, I ran downstairs and out the front door. Garth stood near a long ladder with a gray soaked paintbrush in one hand and a matching paint can in the other.