Apophis – Into the Folds of Darkness
by Raj Anand

January, 2022: A dark monstrous twin-headed apparition – Apophis – feverishly races past the expanse of the Milky Way galaxy and bolts to the edge of the solar system. Recklessly accelerating, the sinister rock-dyad enters the gravitational keyhole of the blue planet and continues its resolute inebriated journey – to soon arrive with an apocalyptic impact on Earth.

December, 2012: Five sentient beings born in different cities – New York, Hong Kong, New Delhi, Azores Islands and Istanbul, discover amongst haunting memories of their phantasmal past lives, that it is their destiny to save humanity from the evil forces unleashed by the alien fiends – the Skyllats.

And now, the reincarnated 9-year-olds must rely on their shared, ancient wisdom to prepare humanity for the war across the galaxy that is imminent. 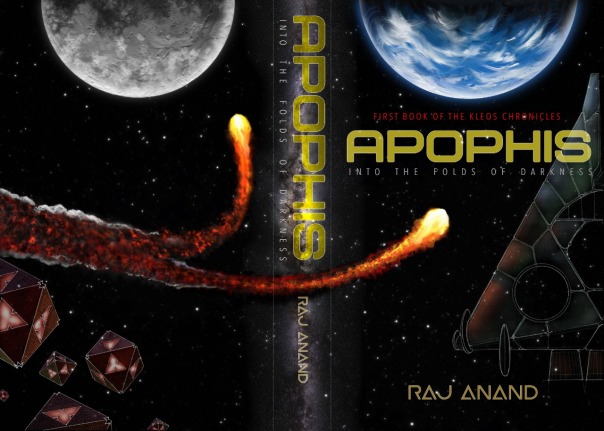 The Barred Spiral Milky Way Galaxy
At the Edge of the Solar System
January 17, 2022 (Earth Time)

A dark monstrous apparition, slingshot from across another realm, camouflaged in a jagged, charcoal black rock, adroitly surfed the gravitational waves of the universe. Feverishly racing past the expanse of the Milky Way galaxy, it bolted to the edge of the solar system and arrived from above the plane of the ecliptic – gyrating closer to the sun.

The dark fiend continued its charge forward, cutting across the path of Venus – nearly crashing onto it, before it deftly decelerated and reached a stable orbit in a retrograde rotation around the pale-yellow planet. This tenacious temporary satellite immediately scrambled to steal a fragment of the protesting planet’s enormous momentum. Catapulted along the plain of the ecliptic, recklessly accelerating at an impossible speed – it shattered, splitting into two.

The newly formed rock dyad – a small black moon orbiting a sphere of death – pulled free from Venus. It continued its inebriated journey, salivating at the opportunity to rain a resolute chaos upon an orphic azure-blue bubble still 40 million kilometers away.

Unbeknownst to the alien rock dyad, a faint sliver of gold orbited nearby. The 7.5-meter-tall and 3.2-meter wide Sentinel Space Telescope clothed in a gold foil, with a giant heat-reflector shield strung along its back; cooled to 40 degrees Kelvin by a two stage, closed cycle Stirling cryocooler. Its 0.51-meter aluminum mirror, dutifully scanned any and all Inner Earth Objects larger than 90 meters in diameter that ever dared to fly across its 200-degree angle of regard.

The Sentinel Observatory, alarmed by the presence of the ghostly twin-headed monster, recorded the black rock dyad’s trajectory, shape, size, mass, and rotational dynamics, before it urgently sent a coded message to its home base in southern Japan. 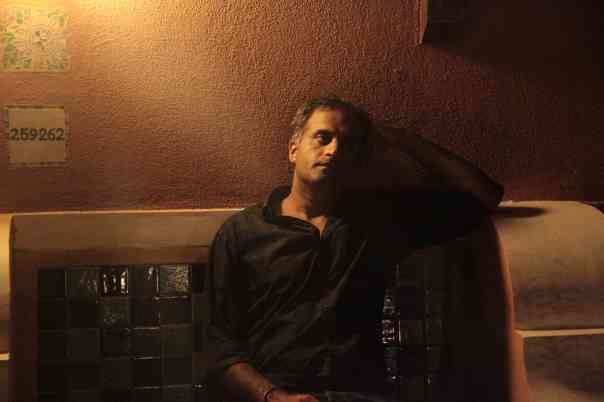 Savinder Raj Anand is an architect and has been teaching Architecture & Design at various Universities in India for more than 12 years. A long-distance runner with a wanderlust to explore the world, and write stories that traverse across diverse cultures. He lives in Goa with his daughter, a dog, and two cats.

Inspired by his then 18-month-old daughter – when she quoted Socrates – while they together sat in a children’s bookstore in Bangalore (LIGHTROOM) in early January of 2015, he has completed this – his first book – as she turns 7 years old.

One randomly chosen winner via rafflecopter will win a $50 Amazon/BN.com gift card.

Enter to win a $0 Amazon/BN GC – a Rafflecopter giveaway

1. Can you describe your dream home?
That is an interesting question to ask of an Architect and an Ex-Professor of Architecture. I have lived most of my adult life on rent, given the paucity of funds and growing up in financially very difficult circumstances. So obviously the dream to finally design and build my own house one day – remains still only a dream. It is quite ironic, that I have designed more than 100 houses for my clients over the past 23 years, but have been unable to realize my own home yet.
But I have faith in the will of the Universe.
About the house – one day! A large green space for my dogs to roam around freely, the open space of course is as important for my young daughter to play in and for me to grow fruits and vegetables. Enough light across the whole house with large windows, a skylight, large volumes and of course an expansive study, where I can immerse myself in writing and happily adding to my extensive book collection.

2. If we were to come to your house for a meal, what would you give us to eat?
I love to cook, but I am a vegetarian. So, I can promise you a great vegetarian (but not vegan) meal. It would certainly be baked, for I love to bake my vegetables, pastas, pizzas and potatoes. I am becoming better by the day in baking my own bread, so that would certainly be part of the menu as would a lemon zest vanilla cake for dessert.

3. Tell us about the absolute BEST fan letter you have received.
In the beginning of April, 2020 (about 4 months before the formal book launch) and amidst the Corona virus epidemic, I began sharing a few chapters every week of the finished manuscript, with everyone who subscribed to them on my website. As an introduction I also made a short video, explaining the larger concept and idea of the book. Over the next few weeks the video went viral across the world, garnering nearly 200,000 views in less than one month and over 1000 readers had subscribed from across the world to read the early chapters – much to my happy surprise and amazement.
One of the earliest reviews volunteered by a reader was as follows:
“APOPHIS: I am closing my eyes and seeing the book wining many accolades and getting made into a Hollywood blockbuster, my friend. What a study, articulate language, thorough details – impressive all the way! I thank you for sharing these early chapters. Pleasure to be a part of this unfolding journey…”

4. Say your publisher has offered to fly you anywhere in the world to do research on an upcoming book, where would you most likely want to go?
Obviously, the upcoming book would be the second in The Kleos Chronicles! For the second book I would love to travel to Mexico and Greece as part of my research (I shall not reveal more! Shhhhh!!!!)

5. Who designed the book cover for the book you are touring?
The book cover (after approaching several graphic designer) was finally designed by an Architect cum Artist based in Ahmedabad, close to the western coast of India. Ashish Dave, being an ardent, self-professed Science Fiction junky for more than 20 years was extremely excited at the prospect of designing the book cover for APOPHIS – his first! As he revealed later, to design a book cover for a Science Fiction book was a dream that had been festering inside of him – for a very long time!
And as the Universe always does, if your hearts are pure – it brought us together, through a common friend. Ashy (as he prefers to be called) and I together worked on the ideation of the book cover for several weeks, before he proposed a book cover that went beyond my wildest imagination!
It was dynamic, beautiful and so perfect in the context of the story and the book.
Thank you, Ashish ‘Ashy’ Dave!
He can be found online on his Instagram handle @flyashy