How do you get a nuke into the heart of the city? Maybe a dolphin can help. From Author John Waite, the tale of a police detective who matches wits with a mad scientist and terrorists intent on destroying America. When detective Hickory Logan joins Park Ranger Kevin Whitehead investigating the mysterious death of a dolphin she finds herself sucked into a far deeper whirlpool. Can she and Kevin stop the tide of terror that threatens to kill thousands or will they be fodder for a nuclear fireball?

A newspaper review described Tursiops thus: “The writing is, well, wonderful. Waite has a gift for dialogue and story-telling, and his plot is adventurous and perfectly paced.”

Red Logan hunkered down next to the Humvee’s left front wheel. He folded his lanky frame in several places to assure that the vehicle shielded him from rifle fire emanating from the house a hundred feet away.

A furious fusillade had greeted A-Company, first battalion, 407th Special Forces when their vehicles pulled to a halt in front of what was a rather strange building for northern Afghanistan. In the early morning darkness it looked for all the world like a California ranch-style home.

But there was no BMW parked in the driveway.

The firefight lasted less than fifteen minutes. There was only an occasional round pinging off the slate-riddled soil and infrequent bursts of automatic fire keeping the soldiers from charging the structure. Red wondered why the squads weren’t using some of the heavier weapons. He knew the unit armament included shoulder-fired missiles and a Carl Gustav 84-mm recoilless rifle but so far, the big stuff had been silent.

The tip had placed Azam al-Zawahiri, Al-Qaeda’s chief organizer for nine-eleven, in the house.

Numerous such tips over the past two years had come to nothing. Most of them originated in minds overly-motivated to garner the twenty million American dollars offered for the capture of several of the world’s most wanted terrorists.

At least one Osama bin Laden look-alike had been found dead. And it took weeks before authorities identified the body.  The man had been killed and left in a house to which an Afghan citizen directed U.S. forces. Not only did he not get the reward he sought, but his countrymen also jailed him for mutilating the corpse by cutting off its hands and feet.

Army intelligence, a title Red thought oxymoronic, had considered tonight’s tip more credible than most since it had come in anonymously. The tipster hadn’t mentioned the reward. So the Special Forces unit had headed out in the predawn darkness for a two-hour drive north from Kabul into the mountainous terrain.

The voice belonged to the figure squeezed into the wheel well behind him.

He could barely see Jessie’s sinewy shape, strangely gawky where the video camera and its now-dark lights rested on her right thigh.

“Yeah, what?” he whispered.

“Should I get some video?” Jessie asked, cocking her left hand back over her shoulder.

“Hell no. We’re reporters, not soldiers. CNN’s not paying us to get shot. Just keep your ass down. There’s nothing to shoot.”

Before he could finish his sentence, an amplified Afghan voice rang out from the vicinity of the lead Humvee, imploring the occupants of the house to surrender. The answer was a three-shot rifle volley, the rounds pinging off the hard-pack and whining away into the darkness.

“Now,” Jessie said, pushing past Red and swinging the camera onto her shoulder, leaning on the Hummer’s hood.

“No.” Red yelled, trying to pull her to the ground. But it was too late. The light on Jessie’s camera flared brilliantly then died in a crash of glass and the harsh double bark of a Kalashnikov. The rounds zinged away into the darkness, but Red heard in the report the crunch of bone. 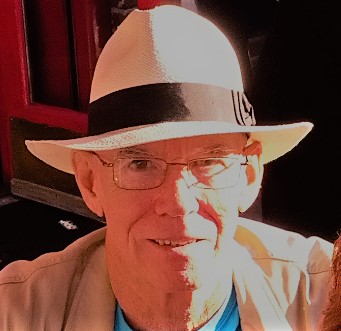 Thousands of author John C Waite’s words flew past Alpha Centauri years ago,  heading for the center of the galaxy, perhaps sparking an arthropod’s grin in route. Waite, a degreed journalist and retired Merchant Mariner has numerous writing and broadcasting awards to his credit, and millions of words in print and broadcast media. Originally from New Orleans he has called Panhandle Florida his home for fifty years, but still retains a taste for things Creole and Cajun. A recreational and professional sailor, his travels have covered the Caribbean, the Atlantic and Pacific coasts, portions of south and Central America, Canada, Hawaii, Ireland, Britain, and Europe. John resides in Pensacola, Florida. He is a father to four, and grandfather to four.  His books are available on Amazon.

John C. Waite will be awarding a $50 Gift Certificate to Nuts.com to a randomly drawn winner via rafflecopter during the tour.

Enter to win a $50 GC to Nuts.com – a Rafflecopter giveaway

Tell us about you as a person, something not everyone knows about you.

Although I was born in New Orleans, I spent most of the first five years of my life in Anchorage, Alaska and I still hate snow. My father was an aviation meteorologist, and he had been stationed in the frigid state during the second Great War. I still have letters that he sent his then-wife, my mother, which are stringently redacted, many sentences blacked out.

I almost remember one fishing trip when, not much more than a toddler, I fell into the creek. My dad built a fire on the railroad tracks which we had walked to the stream and dried my clothes.

I have a few glimmers of memories from those days, the most distinctive of which was when something broke into a backyard cage and slew my pet rabbit. I remember crushing sadness.

From Anchorage, the weather bureau transferred my father to Miami. We spent about a year there, before being transferred back to New Orleans, where I passed my formative years. It was in Miami that I met my paternal grandfather for the first and only time. He was a Presbyterian missionary and had spent some years in China, where my father was born. I still possess letters between my father and his father. Because of his birthplace, my father had to prove his United States citizenship before he could work for the US Weather Bureau.

If you could hang out with one famous person, who would it be?

It would have to be Neil DeGrasse Tyson. He picks up where Carl Sagan left off. Not only is he a real scientist as Sagan was, but he is also a first-rate communicator. He has a feel for putting scientific principles into words. And if there is one thing the world needs more of right now it is real scientists willing and able to transfer their knowledge via the common language. Life is short. Science is forever.

The story behind The Tursiops Syndrome stems in part from my affection for dolphins and people who appreciate them. And I always like stories of international intrigue. Dr. James Crabtree, the angry scientist (notice I didn’t say mad) in Tursiops loves dolphins and seeks notoriety. Despite his affection for Tursiops, he uses them in a get rich-and-famous plan.

My process is to just sit there and stare at the page hoping something will appear. Somehow that happens, and I think I am creating it. If I’m not and it just appears on its own, then I am the luckiest writer in the world.

A bit about Hickory Logan. She worked hard to win her stripes in the Pensacola PD, particularly in the wake of a previous bad relationship. However, she did that and still aims high. So she is a bit wary about her relationship to Kevin, her male co-star in The Tursiops Syndrome. Hickory is a tough, smart woman, with a bit of a soft spot for dolphins, evidenced in her attempt to rescue a porpoise stranded on a sandbar off Pensacola Beach.

If your book were to be turned into a movie, who would play the lead role, and why?

I’ve always liked Halle Berry. She’s been in several action movies and carries herself beautifully, while still packing a good punch. She could certainly carry off Hickory Logan’s persona, and would definitely play well in the love scenes too.

My biggest project is a fictionalized account of the life and death of my best friend. He died in Vietnam early in that disastrous conflict. Had he lived he could have well accomplished his stated purpose in life, to be President of the United States. In the meantime, I am doing several things, some of which appear in the online journal Page and Spine.

What advice do you have for other writers who want to get the word out about their books?

I am still learning how to promote. There is a lot more to it that one imagines. And you have to spend a little money. There is a whole industry out there based on new writers’ needs. It’s a very different profession from what it was just recently.

I’m just finishing Jeffrey Eugenides “Middlesex.” To say the least, it’s a hell of a book. The hurricane of research he put into that volume is mind-blowing.

You are given the choice of one superpower. What superpower would you have and why?

Time travel, because I want to know how the universe ends.
List 5 things on your bucket list:

I write because I want people to enjoy the story. I hope they do.
###