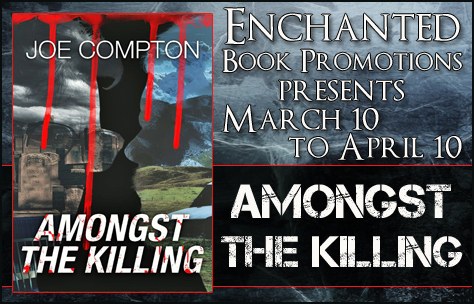 Hi readers. Today I get to chat with Joe Compton. Author of the crime thriller, Amongst The Killing.

Born in Hawthorne, CA in December of 1973 Joe grew up in Southern California; the majority of that spent in Torrance, CA. Writing has always been that thing he could do at an early age. He spent many a summer stints with his Grandma and Aunt where he was left mostly to his imagination and would escape by writing scenes and short stories; then acting them out in the backyard. Sometimes bringing in his brother to help act or just be an audience member. Then when his mother went back to work, Joe would spend the summer with his brother, write scripts ( even before he knew what a screenplay was), and perform all the characters for his brother.

Joe went on to South Torrance High School and while he wasnt the world’s best student, he did manage to have 3 short stories published in the school’s annual creative anthology. They were mostly horror driven, in the vein of Poe or Lovecraft. It would be Joe’s first published works. One of those stories Joe would end up turning into a screenplay and short film. Joe served his country in the United States Marines for 4 years, were he wrote the very first draft of Amongst the Killing. Once he was out of the Marines Joe moved to Denver, got another short story published in a underground magazine called Harvest Moon, a sort of reader’s digest for Horror fans.

Joe started writing screenplays and decided he would like to try making movies. He shot his first movie, Karl’s Liquor in 2001 ; which had one screening and one screening ever, at the awesome, world famous Mercury Cafe in Denver, CO in August of 2001. Joe went on to make 2 more short films, Devilwind and aforementioned (short story turned into movie) Out of Range. Joe at one time had a deal in place with a publishing company to publish Amongst the Killing but didn’t want to change the principle concept and thus walked away. Now a few years later he has started this company and decided to his first release would be Amongst the Killing . In 2010 Joe met the love of his life, his wife Shawna. Knowing that they will have children very soon he wanted to have something to hand over to his child, should they want it. So he felt the time was now to do this. 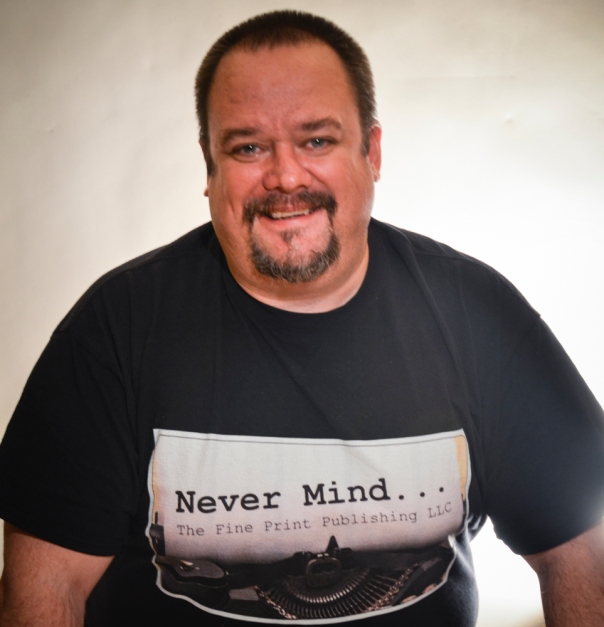 Joe, thanks for being with us today. Please tell our readers about yourself.
I grew up in Southern California, loved to read and write virtually my entire life. I was writing and storytelling before I could remember doing so. I have lived a lot of places, California both Northern and Southern, Austin, Denver, North Carolina, and Japan. I was in the Marines for 4 years. I also love movies, so while in Denver I made 3 short films and helped other filmmakers make theirs. I have always been an free spirit and wanted to do something creative. So the movie thing wasn’t really going the way I hoped but I knew I had this book I wanted to get out. Then in talking to people I know and having been to a few writer’s conference. I realized I wasn’t alone in this thought. So I started this Publishing Company and along with my book I hope to get those folks out to the world too. So here I am starting with my first novel, putting that out there and seeing what happens.

What inspires you to get out of bed each day?
What doesn’t. Life is such a gift and I don’t take that for granted. I like to be creative and any day that starts with me doing that, that’s the best days. I am not much for sleep. Although getting older now has me appreciate it more but I just would rather be doing something creative. I like to challenge myself and I am not afraid to put myself out there so I try to do so everyday.

If you could hang out with one famous person for one day, who would it be and why?
I think right now I would welcome the opportunity to hang out with someone I could learn alot from and I think Steven Spielberg would be that guy. He is beyond busy and he is an impressive human and moreover impressive working machine. I think being a sponge around him would be the most I could gain from an experience. He’s also famous for all the right reasons and it doesn’t define him. I like that.

What’s the story behind your latest book?
I am not a big fan of the judgmental aspect of society and I wanted to write that challenges the notions of what we assume in people, just my their title and their actions. I really felt like I hadn’t read a story that really captures both sides of the story either. A detective and mass murderer seemed like the ultimate playground for those thoughts. So I spent a lot fo time learning about the cops and especially detectives. I read some murderers biographies and try as much as I could to read the auto-biographies more so than someone else giving accounts. Then I applied the emotional aspects of being human and this book is the result of that.

What are you working on next?
I am writing 2 books right now. One is a sequel to this one called “We The Moral Majority“. The other is a departure from the police world and into the World of war called “P.O.W.” about a young Marine Officer who recounts how much he changed as a result of being a prisoner of war.

Do you have any special/extraordinary talents?
No I am pretty talentless other than writing, nothing had ever been natural to me.

Who are your favorite authors?
Poe and Shakespeare are my go to reads. I am actually all over the place though I like HP Lovecraft, Mario Puzo, Jon Steinbeck, Ray Bradbury, Alice Sebold, the early works of Dean Koontz, and James Patterson. I also like AJ Jacobs and all the crazy things he tries and writes about.

My 2 favorite books are To Kill A Mockingbird and The Davinci Code. Those are as close to perfection as I have read.

What do you like to do with your free time?
Movies, I love the ethereal experience of a movie theater and I go as much as I can, which is usually about 35-50 times a year. I also love baseball, especially the San Francisco Giants. Go to a handful of their games and to a handful of their Minor League Affiliate. I live in San Jose, home of their Single A team. My wife and I go to a dozen or so of those each year too. Been real bad about reading the last couple years but I vowed to get myself more into that.

Tell us about your plans for upcoming books.
Well my publishing company has several we hope in the horizon. The Author, me, has the books I mentioned early and just might have a couple more I will write. I carry a notepad or am never far from a pen and paper and come up with ideas all the time. So I try to constantly be writing.

Any final thoughts?
Thank you so much for doing this. I really appreciate it. Everybody should go to amazon.com, itunes, barnes and noble, or smashwords and buy my book. My website is very interactive so you can tell me what you thought, good or bad I really appreciate any feedback.

Thanks Joe for being here today

Title: Amongst the Killing

For as long as he could remember, Detective Charles Street wanted to be a police officer, moreover a detective. He wanted to be knee-deep in the action, working the biggest cases, and reaping the biggest rewards. But he didn’t think when his dream job came calling that it would ever turn into his nightmare.

For as long as he could remember, Jack Casey just wanted to be free, his own man to do what he pleased, when he pleased. He too craved action, and when his dream life came calling, he didn’t think he would meet anyone who was his equal, and definitely didn’t think he would ever have difficulty leaving behind the world he loathed and mocked.

Amongst The Killing documents both of their stories, told in their own words, as the moments unfolded when their paths first crossed and their lives intersected. How could two men, with two different philosophies, be so different and yet so connected?

As the ultimate cat and mouse game unfolds, each has to deal separately with the other’s decisions and the effects they have in turning their lives sideways and upside-down. Will one of them crack? Will one of them succeed? Ultimately, the journey may mean more than the game, and show both of them the outcome neither was ever expecting.

Buy the Book on Smashwords: https://www.smashwords.com/books/view/521250