All over the world, anywhere of historical interest or natural beauty that lends itself to development, has been given over to tourism. The setting for The Drago Tree, Lanzarote, a Canary Island off the coast of Morocco, is no exception. Tourism is a major theme in the story as protagonist, Ann, struggles to come to terms with the impact of tourism on the island. She sets herself apart, and longs for a place far from thrill seekers.

Often tourism decimates local cultures and environments: traditional land given over to golf courses, rivers and lakes to swimming pools. Farmers cash in and open a restaurant. Local businesspeople and governments sign lucrative property deals. Soon hotels are everywhere, and whatever there was of ‘local’ is subsumed and struggles to survive.

On Lanzarote, tourism has spawned a new wave of colonisation, that of ex-pats, as (mainly) the British seek a place in the sun.  It’s an odd situation, in that Lanzarote’s economy has boomed.  Further, many of the ex-pats feel as strongly as Ann about the island. And as strongly as some notable artists, such as César Manrique,  who developed sites of natural beauty and turned them into works of sculpture. His legacy means there are strong restrictions on all development and much of the island has been preserved in its natural state, or prevented from decay. Forts have become museums. There’s an ever growing and universal sense of civic pride.  Still, Ann doesn’t know all this. Her view is throughout the book staunchly anti-tourist.

As with every story, parts are culled, for no other reason than a lack of fit, or something similar has already been said and to say more would be overdoing it.

Here’s an extract that didn’t make the final draft, but it gives a good indication of the tone of The Drago Tree and Ann’s feelings about tourism.

‘This island, set to become as trodden over as Bali and Benidorm, was for Ann an idyll of igneous rock. Ann, the geologist, ought to know. Tourists only ever see the surface, only what they are told to see, look here, look there, taking it all in with the limited understanding of the pocket-book guide. Here on Lanzarote, humankind can view the earth’s subcutaneous layer smeared upon its skin. It baffled Ann that tourists should want to come here. Perhaps, like her, they hankered to be as far from the pastures back home as the moon.’

Haunted by demons past and present, geologist Ann Salter seeks sanctuary on the exotic island of Lanzarote. There she meets charismatic author Richard Parry and indigenous potter Domingo and together they explore the island.

Ann’s encounters with the island’s hidden treasures becomes a journey deep inside herself as she struggles to understand who she was, who she is, and who she wants to be.

Set against a panoramic backdrop of dramatic island landscapes and Spanish colonial history, The Drago Tree is an intriguing tale of betrayal, conquest and love in all its forms.

“This beautifully constructed novel reveals the complexity we invite into our lives when we open our hearts to passion.” Robert Hillman, The Honey Thief

Isobel Blackthorn was born in London and has lived in Spain, Lanzarote, (Canary Islands), and Australia. She’s been a teacher, market trader, project manager and PA to a literary agent. Isobel received her PhD in Social Ecology in 2006. She now lives in rural New South Wales where she follows her passions for social justice, philosophy, current affairs, books and art.

Isobel is the author of a collection of short stories, All Because of You (Ginninderra Press), and the novel, Asylum (Odyssey Books). Her writing has appeared in e-journals in Australia and the US. Her second novel, The Drago Tree, was released by Odyssey books on 1 October 2015. 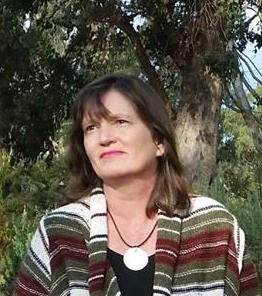 Tags: @IBlackthorn, All Because of You, Asylum, Isobel Blackthorn, The Drago Tree